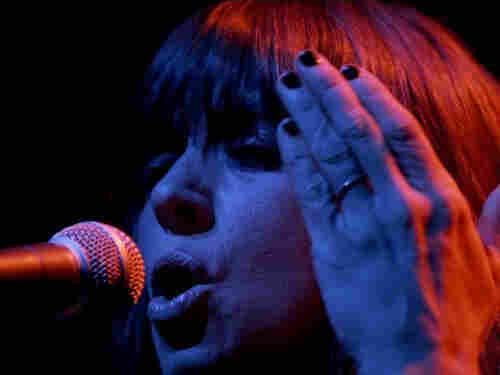 Cat Power is the music of Chan Marshall, a Southern-born singer-songwriter with a soulful, heart-wrenching voice. In a decade-long career, her music has evolved from spare, angst-ridden rock to lush, warm soul, while always intimate and mesmerizing. Hear Cat Power in a full concert, recorded live from Washington, D.C.

Chan (pronounced "Shawn") Marshall turned to music after dropping out of high school in Atlanta in the mid '90s. She began playing around town under the name Cat Power and eventually moved to New York, where she opened for Liz Phair and met Steve Shelley of Sonic Youth. In 1996 she signed with Matador Records and released What Would the Community Think. Marshall toured for the album briefly and it was received well critically. But after a few months she dropped out of the music scene and reportedly planned to retire from the business all together.

After working as a babysitter and moving to a farmhouse, Marshall found inspiration again and crafted a series of songs that would become the album Moon Pix, released in 1998. She followed it with The Covers Record in 2000, an album with completely reinvented versions of songs like "Satisfaction" by the Rolling Stones and "I Found A Reason" by Lou Reed.

In 2003 Marshall returned with all-original material for You Are Free, a critically acclaimed album featuring guest musicians like Eddie Vedder and Dave Grohl. It was her most polished and fully developed album to date with minimalist, piano-driven songs on love, her struggles as an artist and finding peace in a painful world.

Marshall's latest CD, The Greatest, takes a surprising turn through a hazy world of mellow Southern soul. Recorded in Memphis, Tenn., Marshall had help from veteran artists like guitarist Mabon Teenie Hodges and bassist, Leroy Flick Hodges, known for their work with Al Green and Ann Peebles. The New York Times calls it "the best work of her life."

Cat Power is touring for The Greatest with the Memphis Rhythm Band. Marshall has a reputation for giving sometimes unpredictable live performances. But her current tour is the best-reviewed of her career.

This live webcast is a production of NPR Music's All Songs Considered and the 9:30 Club in Washington, D.C.