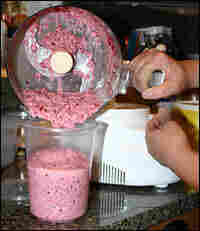 "It sounds terrible but tastes terrific," Stamberg says of the Pepto Bismol-pink dish.

Below is the cranberry relish recipe, and a bonus recipe for another Stamberg favorite — garlicky cranberry chutney.

The relish will be thick, creamy, and shocking pink. ("OK, Pepto Bismol pink. It has a tangy taste that cuts through and perks up the turkey and gravy. Its also good on next-day turkey sandwiches, and with roast beef.")

1-pound can cranberry sauce with berries

Cut ginger into paperthin slices, stack them together and cut into really thin slivers.

Add can of cranberry sauce, salt and pepper. Mix and bring to a simmer. Lumps are ok. Simmer on a gentle heat for about 10 minutes.