Accessibility links
Hamas: Government or Terrorist Organization? Hamas was democratically elected by Palestinians in the West Bank and Gaza. Is it still a terrorist organization? Expert panelists consider that question as part of the latest debate in the Intelligence Squared U.S. series.

Listen to an Edited Broadcast of the Debate (50 minutes) 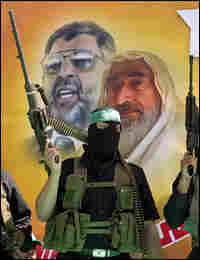 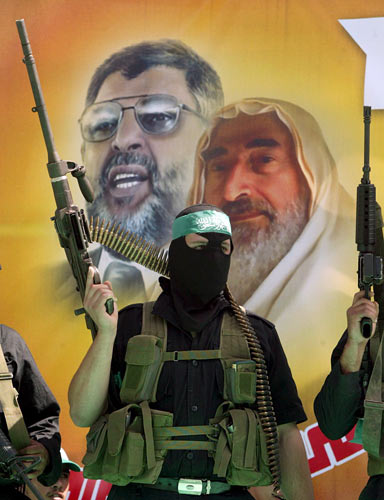 Masked Palestinian members of Hamas take part in a West Bank rally to celebrate Israel's pullout from the Gaza Strip in September 2005.

Perhaps what is most striking about this debate is that there was virtually no disagreement on the facts. Three panelists argued that Hamas is a terrorist organization. Three others responded that Hamas now leads a legitimate, democratically elected government and is not a terrorist group.

But almost all agreed on the basic details: Hamas has targeted and killed many civilians, and Israel's occupation has contributed to a violent political environment. In short, this was not a debate about facts; it was a debate about how to frame those facts.

The programs follow Oxford rules: There is a motion. Three experts argue in favor it; three others argue against it. Then the audience votes on whether the motion should be approved.

In this debate, the proposal was "A democratically elected Hamas is still a terrorist organization."

Hamas was founded in 1987 by Islamic activists in Gaza to offer Palestinians an alternative to the Palestine Liberation Organization (PLO). Hamas' charter calls for an Islamic-based Palestinian state on all of what is currently Israel, the West Bank and Gaza. The group has conducted violent action against Israeli military and civilian targets, including suicide bombings. Hamas has been named a terrorist organization by the United States and the European Union. It is supported by the governments of Syria and Iran and many wealthy private individuals in Saudi Arabia, among others in the Arab world. 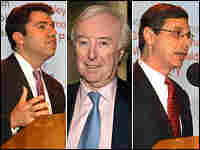 Daniel Ayalon, Israel's former ambassador to the United States, says of Hamas, "They send terrorists strapped in explosives into markets, into pizzerias, into coffee shops, and into school buses and kindergartens. This is what they do. Are they a terrorist organization? If this is the definition of terror, they definitely are a terror organization."

Steven Cook, a Mideast expert at the Council on Foreign Relations, says, "For Hamas to no longer be considered a terrorist organization it must change its charter, it must renounce its violence and it must lay down its arms. At that point, and only at that point, can it be seen as a legitimate participant in the political arena."

John O'Sullivan, a senior fellow at the Hudson Institute, says, "When we deal with such bodies as if they are conventional parties, we are making murder respectable. We are in fact inciting people to murder... because we have admitted, we are negotiating with them because they murder people and not for any other reason."

From its beginnings in the 1960s, the PLO had been the dominant force in Palestinian politics. But since it came to power as head of the Palestine Authority in the post-Oslo era in 1993, its image has suffered because its leadership was seen as ineffective and overly tolerant of corruption. As a result, Hamas' influence has grown. It ran its own shadow government and won great support among Palestinians because of the extensive network of social services it offered in the occupied territories. Hamas leaders are generally considered to be more effective and less corrupt than the PLO. In January 2006, Hamas won a dramatic victory in Palestinian elections and became the dominant political power in Palestine.

Since that election, Israel and many Western powers have struggled with how best to interact with a group that is at once labeled terrorist and, at the same time, is the legitimately elected leadership of the Palestinian National Authority. 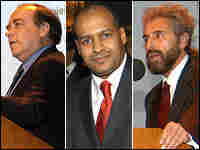 Mohamed Mohamedou, of the Harvard Program on Humanitarian Policy and Conflict Research, says, "Hamas is no longer a terrorist organization. Hamas has moved to a political contest, which it has joined legitimately and has won fairly. More importantly, Hamas holds high levels of legitimacy among the majority of the people that it has been elected to represent and lead."

Mark Perry, co-director of the Conflicts Forum, says Hamas "stopped these suicide bombings through talk because they realized how ineffective they were, how they were losing support for what they feel is a legitimate cause. There hasn't been a Hamas-led suicide bombing in Israel since August of 2004. That's a fact. People can change."

Steven A. Cook, a Middle East expert at the Council on Foreign Relations, started off the evening by acknowledging several facts, which he immediately said were entirely irrelevant. Yes, he said, Hamas was legitimately elected freely and fairly. Yes, Israel has illegally occupied the West Bank and, until recently, Gaza. Yes, Hamas has done much good with its social programs. But, he said, none of that matters. Hamas' central charter calls for the violent overthrow of Israel. Hamas continues to kill innocent civilians. The group must lay down its arms and renounce its violent charter. Until then, Cook said, Hamas can only be labeled a terrorist group.

John O'Sullivan, a senior fellow at the Hudson Institute, furthered Cook's argument. He proposed using the definition of terrorist adopted by the Canadian government (a definition, he points out, that the Canadians took from his own writing): "A terrorist is a man who murders indiscriminately, distinguishing neither between civilian and innocent and guilty nor soldier and civilian." Terrorism, O'Sullivan argued, is an issue of tactics, not ultimate goals. There can be pro-Nazi and anti-Nazi terrorists, he said; pro-Israel terrorists and anti-Israel ones. In other words, it doesn't matter what we think of Hamas' ultimate goals. All that is important, he argued, is that they employ indiscriminate violence. Until they stop, they should be labeled as terrorists and treated as international pariahs.

Unlike the two other critics of Hamas, Daniel Ayalon, Israel's former ambassador to the United States, argued that recent history is crucial in assessing Hamas' legitimacy. He said Israel has continuously sought peace only to see Arab nations and Palestinians respond with rejection and violence. He portrayed Hamas not as a legitimate leader of Palestinians but as a violent tool of the Syrian and Iranian governments. He further argued that January's vote for Hamas was really a rejection of the corrupt PLO and not a mandate for Hamas' vision of the future.

Stanley Cohen, a lawyer who has represented Hamas activists, presented a very different vision of recent history. He portrayed a powerful and vicious Israel that has indiscriminately killed many thousands of innocent Palestinians. Cohen argued that Hamas is not a terrorist group, but a nationalist resistance forced to resort to violence because it has so little power compared with Israel. He noted that former world leaders, including Nelson Mandela and the late Menachem Begin, former prime minister of Israel, also employed violence in nationalist struggles. Cohen further argued that Hamas is the only Palestinian group with the legitimacy and expertise needed to bring peace.

Mohamed Mohamedou, the associate director of Harvard's Program on Humanitarian Policy and Conflict Research, agreed with Cohen that the crucial issue is how badly Israel has treated the Palestinians. He said that in the context of nearly 40 years of Israeli occupation of Palestinian lands, Hamas is best understood not as a terrorist group but as, "the radicalized military expression of a national liberation movement." Further, he argued that even if Hamas could once have been labeled a terrorist group, it can be no longer; Hamas, he says, has fully engaged the rules of democracy and has focused its efforts on social welfare programs for poor Palestinians.

Mark Perry, co-director of the Conflicts Forum, acknowledged that Hamas has wrongly killed innocents. But he argued that the group has given up on violence in favor of political solutions. Perry argued that many American allies, including the current prime minister of Iraq, Nouri al-Maliki, are former terrorists who have now adopted political solutions. Perry said the only reason the United States and other Western powers oppose Hamas is because the group is Muslim. He said that Americans are prejudiced against Muslims and consider Muslims to be too different to be embraced.

The audience was asked to vote before and after the speakers made their arguments. At the beginning of the evening, 60 percent voted that Hamas is, indeed, still a terrorist organization, 19 percent voted against that proposition and 21 percent didn't know. After the talk, 51 percent were in favor of the motion, 32 percent opposed it and 17 percent were undecided.

Motion: A Democratically Elected Hamas Is Still a Terrorist Organization

Read about the panelists participating in the third of eight Intelligence Squared U.S. debates to be aired by NPR member stations.