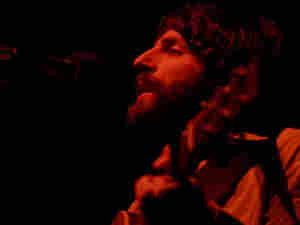 Singer, songwriter and guitarist Ray LaMontagne makes mellow, sometimes dark, poetry songs that are part folk, part soul, with warmly textured atmospherics. His latest CD, Till the Sun Turns Black is a collection of melancholy tales LaMontagne says "ate away" at him until they were recorded. Hear the artists recorded live in a full concert from Washington, D.C.'s 9:30 Club.

Gone Away From Me

Hold You In My Arms

You Can Bring Me Flowers

Till the Sun Turns Black

Hear our interview with Ray LaMontagne

Unlike a lot of artists, LaMontagne did not grow up in a musical family. He was raised mostly by his mother; they moved around a lot, and there was virtually no music played or heard in his home, not even on the radio. LaMontagne decided to pursue a life in music only after high school when he was working at a shoe factory in Maine. Thats where he first heard the music of Stephen Stills.

LaMontagne tells NPR's Scott Simon, "It was 'Treetop Flyer' off a solo record that Stills had done, which really knocked me out. But then, when I went to the record store to find his stuff, I found the Manassas record. And that is really what clinched it. It's an absolutely stunning record."

LaMontagne put together a demo tape that found its way to Chrysalis Publishing which liked enough to produce his critically-acclaimed debut, Trouble. It sold a quarter of a million copies.

LaMontagne tells KCRW's Chris Douridas, that music "is just a release of all that stuff inside you that's trying to kill you. You know, I think just — life is so difficult. The thing I love about music is that you can take things that are painful, deep things that hurt you, and you can turn them into something beautiful."

LaMontagne's sophomore release is darker than his debut. "It's definitely not 'Trouble, Part 2'," he says. "People want to put you in a category, I've found. But it's like this: the voice is just an instrument. Every song asks to be sung in a different way. If I were to sing every song in a classic soul style, none of these songs on this record would be effective. I've tried to follow the songs."

LaMontagne seeks to craft songs that are both personal and universal. "It's so easy to get caught up in your own experiences," he says. "They can seem so important. But there are billions and billions of other experiences going on. I guess the album is just me trying to look at things beyond myself, wondering what it is to be alive and what it's all about. I do get into my own experiences — I put the blinders on, in that sense, just dealing with my own life events. But then I try to open the blinders back up again, at the end."

Monday's live concert webcast will be hosted by Bob Boilen of NPR Music's All Songs Considered.