An Indie Supergroup Gets Experimental

An Indie Supergroup Gets Experimental 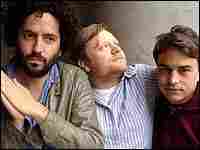 The debut of a so-called "supergroup" can be a double-edged sword for fans: It's easy to get excited by the musical possibilities, but lofty expectations — as well as the interlocking (and often contradictory) styles of the participants — can be hard to manage.

"Widow's Walk" toys with an almost meditative cacophony. Amid a melodic blur of fuzzed-out guitars, Bowie-tinged vocals and a fiery assault of archaic synthesizers, the words and meanings are elusive and evocative, as Bejar chants, "And in the light of what was there / it's been said they heard me bid you, 'Come on!' / on your way down Widow's Walk." The result showcases enough chemistry to make Swan Lake more than a mere curiosity.