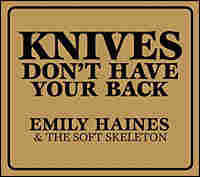 This streaming live concert is a production of NPR Music's All Songs Considered and the 9:30 Club in Washington, D.C.

To download, right-click (pc) or ctrl-click (mac) and save/download the linked file to your computer.

Crowd Surf Off A Cliff

The Maid Needs A Maid 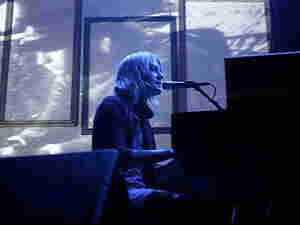 View a Slideshow of the Concert
Photo Joel Didriksen for kingpinphoto.com

Emily Haines makes ethereal, piano-driven songs that are dark and gloomy, but utterly infectious. Her debut solo release, Knives Don't Have Your Back, was critically lauded as one of the best, if bleakest albums of 2006. Haines visited Washington, D.C.'s 9:30 Club for a full concert, originally webcast live on NPR.org Jan. 10.

Haines got her start as the lead singer for the Canadian dance-pop group Metric. Though she's still with the band, she's long been working on her own collection of songs and wanted to take time to record them.

"When I was a little kid, I would creep downstairs to the piano and write rudimentary songs about imaginary places," Haines says. "I'm told the first song I ever wrote was a love song to a cranberry tree. I always used the mute pedal. I hated the idea of anybody hearing me.

"Everywhere I've lived while working with Metric, I've written songs on the piano and played them for no one. On the advice of a friend, I decided I'd better start recording them before they were forgotten. Four meandering years later I ended up with this collection of songs featuring a few of my favorite people, a group I call The Soft Skeleton."

While the music of Metric is more upbeat and danceable, Haines' songs are much more intimate and mellow, drawing directly from her own personal experiences. Several songs, including "Reading in Bed" and "Mostly Waving" were recorded in Toronto during the winter of 2002, while Haines was mourning the sudden loss of her father, poet Paul Haines. Other songs were conceived during Metric's early years, when the band was struggling to make ends meet, while more recent tracks were written with a change in perspective, as Haines faced Metric's growing success.

Album
Knives Don't Have Your Back
Artist
Emily Haines