Finding Songs Amid Clutter and Chaos

Finding Songs Amid Clutter and Chaos 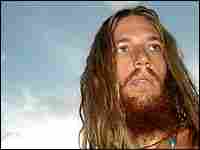 White Flight, a.k.a. Justin Roelofs, is all about deconstructing the pop-music form: His esoteric new self-titled album, while showcasing his remarkable instrumental prowess, also sounds largely experimental. Roelofs tinkers with a wide range of sounds, complementing freak folk and psychedelic rock with hip-hop beats and soul and jazz harmonies. It feels as if he's discovering songs amid the amorphous clutter and chaos, almost by accident.

The sprightly "Pastora Divine" swirls and switches between electric dissonance and a melody worthy of a singalong. Though Roelofs often unintelligibly wails and wallows, he's backed by a string of '60s-pop sounds — complete with "la la la" choruses — that channel Wolf Parade's off-key vocals and TV on the Radio's sonic experiments. Through the varied movements, genres mash together with bursts of wah-wah guitars and clanging pianos. Just as the song begins its fade, a screaming note lingers into a cheerful vamp that should leave listeners humming long after it breaks apart.