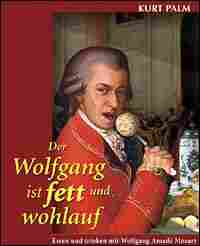 A note from Mozart's father was the inspiration for Kurt Palm's book, Wolfgang Is Fat and in Good Health. hide caption

"If one does not ruin one's health through undisciplined and excessive eating and drinking, etc., and has no other internal constitutional disorders, there is nothing to worry about. We are in God's hands wherever we are. Wolfgang will not ruin his health by eating and drinking. He is fat and in good health, and is merry and cheerful all day long."

This note from Mozart's father was the inspiration for Kurt Palm's book, Wolfgang Is Fat and in Good Health.

"The liver dumplings that Wolfgang preferred to eat were the fried liver dumplings, which are still today on the menus of restaurants in Salzburg. These dumplings are not cooked and put in soups, but deep fried in clarified butter and served with sauerkraut. " — Kurt Palm

Return to the Main Feature

Here is a liver dumpling recipe from the Office of Austrian Information: 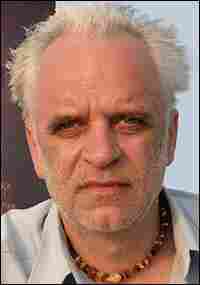 Pour milk over the rolls and work it in. Chop the onion and sauté it in butter. Mix the rolls, finely chopped liver and spices together. Make into a dough. Form the dumplings and boil them for 15 minutes in salted water. You can also fry them in hot vegetable oil.

Best served hot in a beef broth. Liver dumplings can also be served as a main dish with sauerkraut.

A few tips may be helpful, particularly for less experienced dumpling makers who are exhorted not to give up at the first mis-cooked, collapsed dumpling. It doesn't matter whether the dumplings which you're preparing are "naked" or blind" (that is, without filling or seasoning, apart from salt and pepper), or whether they are filled (with meat, sausage, vegetables, fruit or whatever), or fried in dripping, or boiled in a cloth, such as a table napkin. In any case, these tips apply.

* The flour to be used for dumplings should be self-raising, or a mixture of plain and self-raising.

* Dough made of bread, the crumbs of bread rolls, or semolina must be allowed to "rest" for a while in order to absorb moisture.

* Dumplings used as garnish in soup, meat and liver dumplings, as well as bread dumplings, should be rounded with wet hands.

* It is advisable to cook one dumpling first as a trial. If the inside is "dry," it is a success; if it is too solid, add liquid (soup, milk or water); if it tends to fall apart, perhaps bind with egg and/or flour.

* Drain the dumplings carefully and serve in a warm dish. If dumplings are to be kept warm and you do not have a steamer, put them in a colander on top of a saucepan of hot water.