Accessibility links
A Power-Pop Gem with a Hint of Turmoil Where other bands often fail to inject their own personality into the indie-rock canon, The Broken West pulls its influences together cohesively.

A Power-Pop Gem with a Hint of Turmoil

A Power-Pop Gem with a Hint of Turmoil 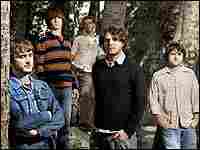 The Broken West injects its own personality into well-worn indie-rock territory. hide caption

The Broken West's infectious debut, I Can't Go On, I'll Go On, will surely draw comparisons to the likes of Spoon, Big Star and mid-period Wilco. But where other bands often fail to inject their own personality into the indie-rock canon, The Broken West (until recently known as The Brokedown) pulls its influences together smartly and cohesively.

A power-pop gem, "Hale Sunrise" juxtaposes The Broken West's catchy hooks and tight vocal harmonies with vague hints of turmoil and heartache. Ross Flournoy's raspy voice adds a layer of depth as he sings of rootlessness, youthful indecision and isolation. The sentiments may be intimate, but they're painted in broad enough strokes to let listeners fill in the blanks and suit their own purposes.

That said, "Hale Sunrise" isn't an exercise in doom and gloom: Its chorus builds to a joyous peak of soaring guitars and major chords, as Flournoy recites the mantra, "Hale Sunrise Hollywood / I don't want to go there / I don't want to go there at all." It's booming enough to serve as an ideal road-trip anthem for anyone driving away from the general direction of Hollywood.

Album
I Can't Go On, I'll Go On
Artist
The Broken West