Accessibility links
Chronology: A History of the Shiite-Sunni Split The division of Islam into Sunni and Shiite branches goes far back in Muslim history to the aftermath of the death of the Prophet Muhammad. Read a chronology. 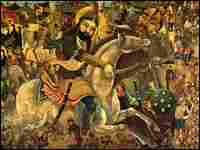 A painting depicts the battle of Karbala in 680, in which Imam Hussein engaged a superior Arab army and was killed in battle. Brooklyn Museum/Corbis hide caption

A painting depicts the battle of Karbala in 680, in which Imam Hussein engaged a superior Arab army and was killed in battle.

The division of Islam into Sunni and Shiite branches goes far back in Muslim history to the aftermath of the death of the Prophet Muhammad. Its repercussions have rippled through history, with periods of peace and periods of war. With the recent turmoil, the conflict between Shiite and Sunni is once again a driving force behind events in the Middle East. Read a chronology:

570: The Prophet Muhammad is born.

598: Ali, who will become the fourth caliph and the first Shiite Imam, is born.

610: The year Muslims cite as the beginning of Muhammad's mission and revelation of the Quran.

613: The public preaching of Islam begins.

632: Muhammad dies. Abu Bakr is chosen as caliph, his successor. A minority favors Ali. They become known as Shiat Ali, or the partisans of Ali.

656: Ali becomes the fourth caliph after his predecessor is assassinated. Some among the Muslims rebel against him.

661: Violence and turmoil spread among the Muslims; Ali is assassinated.

680: Hussein, son of Ali, marches against the superior army of the caliph at Karbala in Iraq. He is defeated, his army massacred, and he is beheaded. The split between Shiites and Sunnis deepens. Shiites consider Ali their first imam, Hussein the third.

873-940: In the period, known as the Lesser Occultation, the son of the 11th Imam disappears, leaving his representatives to head the Shiite faith.

940: The Greater Occultation of the 12th or Hidden Imam begins. No imam or representative presides over the Shiite faithful.

1501: Ismail I establishes the Safavid dynasty in Persia and declares Shiism the state religion.

1900: Ruhollah Khomeini is born in Persia.

1920-1922: Arabs, both Shiite and Sunni, revolt against British control of Iraq.

1953: A joint CIA/British intelligence operation in Iran keeps the shah on the throne and ousts nationalist Prime Minister Mohammad Mossadegh.

1963: Amid widespread protests in Iran against the shah, Ayatollah Khomeini is arrested, then exiled to Najaf in Iraq.

1967: Israel defeats Egypt, Syria and Jordan in the Six-Day War.

1973: Israel defeats Egypt and Syria in the Yom Kippur War.

1978-79: Widespread protests force the shah to abdicate and flee Iran. Ayatollah Khomeini returns to Iran to lead the revolution.

1980-1988: Iran-Iraq War. Hundreds of thousands die on each side and the war ends in a stalemate.

1991: The U.S. military ousts the Iraqi army from Kuwait. Shiites of southern Iraq rebel against Saddam, who puts down the rebellion brutally. Thousands of Shiites are killed.

2006: War breaks out between Israel and Hezbollah in Lebanon. The U.N. Security Council imposes economic sanctions on Iran in response to nuclear activities.