Accessibility links
How Hollywood Makes Noise They've created the sound effects for more than 200 movies, including World Trade Center and Kill Bill. Jeff Wilhoit and Jim Moriana share some of the tricks of the trade. 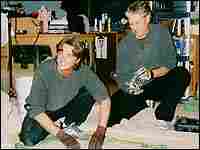 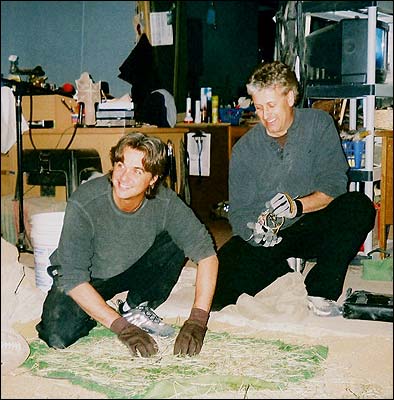 To create the sound of snow crunching, fill an old sock with cornstarch and squeeze. The footsteps are added later.

For a body hit, the Foley artists use something that looks like a square punching bag or a "giant sponge." 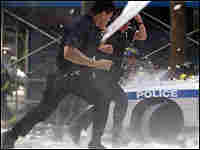 Without sound, a movie is just celluloid and sprockets. But often there are too many distracting noises to capture the perfect effect. Sound is usually added in post-production.

One of the places where filmmakers go to add sound is Todd-AO Studios in Santa Monica, Calif. The facility has a Foley stage, where "human effects" such as footsteps, body punching, eggs frying and dogs running are recreated.

For snapping bones? Twist spaghetti. It makes great cartilage. Celery or bok choy are good for breaking bones. Use a wet chamois cloth to make the gushy sound for blood.

Jeffrey Wilhoit and James Moriana have been working on Todd-AO's Foley stage together for 20 years. It's a crowded, dusty, workroom filled with car doors, old chains — the kind of junk you might find at a garage sale.

They're following in the footsteps of movie pioneer Jack Foley, who perfected sound effects in the first talking pictures. A major part of his work was re-creating an actor's footsteps. That's still the case today.

Even though Wilhoit and Moriana create some 150 different effects each day while working on a film, they're still primarily "Foley walkers" — with more than 100 pairs of shoes between the two of them.

Why the obsession over sound? "If it's not there, you will notice," says Wilhoit. "It's just that little organic element."

Director William Friedkin (The Exorcist) agrees. "The sound effects and the music very often, to me, carry the scene," he says.

Three decades ago, Friedkin mixed the sound for The Exorcist at Todd-AO. In the film's most chilling scene, a child is possessed by the demon and her head turns totally around on her neck. The director was in need of some creative effects.

He hired Gonzalo Gavira, an innovative sound man from Mexico. Gavira found an old, cracked leather wallet that was full of credit cards and stood in front of a microphone. He started to bend the wallet, and the creaking that followed became an unforgettable movie sound.