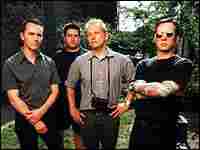 For all its sonic ambition, The Sea and Cake sticks mostly with jazz-tinged mellow moods. hide caption

On The Sea and Cake's surprisingly hard-nosed "Crossing Line," Prekop's wispy vocal cadences and phrasing sound comfortably expressive: His breathy intonation recalls an instrumental approach not unlike alto saxophonist Paul Desmond as he paints his words and melodies with an airy delicacy. It's an understated approach that allows his bandmates' subtle and articulate work to remain more or less in the foreground, with the guitars' fuzzy bite building a colorful tension-and-release effect when positioned alongside Prekop.

Like most of The Sea and Cake's previous albums, Everybody (out May 8) doesn't demand notice at first: Prekop and company's distinctive, even repetitive sound could border on unobtrusive sameness if heard at little more than an epidermal level. But The Sea and Cake's charm lies in its warm nuances rather than any strident pleas for attention, with its rewards revealing themselves slowly over time.