Accessibility links
'Embrace the Suck' and More Military Speak A new handbook compiled by an Iraq war veteran translates terms like "fobbit," "FUBIJAR" and "Marineland" for those of us who don't serve in the armed forces and may be asking "Semper why?" 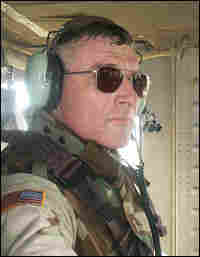 Austin Bay, who is retired from the U.S Army Reserve, was recalled to active duty and served in Iraq in 2004. James Swanston/Austin Bay hide caption 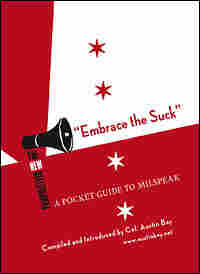 A savvy linguist—and any advertising exec who has ever made a cent in that tough business—will argue that utility and identity shape every type and act of human communication.

No argument. Priests, prostitutes, psychologists, cops, jazz musicians, poker players, the gang at the beauty shop—every trade has its jargon; every group a lingo or recognition code that separates "ins from outs" and "us from them."

Warrior slang, however, has a peculiar appeal and influence. That's understandable. Waging war is a risky, all-encompassing endeavor physically, emotionally, and psychologically. It displays humankind at its best and at its worst, and the warfighter's slang reflects the bitter, terrible, and inspiring all of it. A quick scan of this dictionary illustrates the spectrum: disciplined bravado provides the glitz and glamour; earned camaraderie, the sincerity and warmth; irony, the realist's edge; scorn, the punishing barb; and insistent vulgarity, a rowdy, leveling earthiness.

A little verbal bravado and swagger has genuine utility. Hollywood bravado is little more than chestthumping bluster, but seasoned vets know that disciplined bravado indicates confidence and courage. Physical and moral courage and the confidence they create are essential warrior virtues. But God—or the first sergeant—help the fake macho and especially the "REMF," "fobbit," or "suit" who talks the talk but hasn't walked the walk.

At its core, warrior slang is a language of discipline and shared suffering, experiences that produce a tough human epoxy: the industrial strength social and emotional glue binding military comrades and building military units.

Warrior slang accepts suffering as inevitable. It also says, "Buddy, you ain't in this alone." Take the acronym "MARINES." The wry definition is "Many Americans Running Into Never Ending S***." (That addresses a "corps" identity issue.) The Operation Iraqi Freedom phrase "embrace the suck" is both an implied order and wise advice couched as a vulgar quip.

Prussian General Carl von Clausewitz went to war when he was 12 years old. Over the last two decades, critics have argued that his treatise On War is a bit dated in terms of theory. However, everyone with military experience agrees that Clausewitz understood "the suck."

He called it "friction."

"Everything in war is very simple," Clausewitz wrote, "but the simplest thing is difficult. The difficulties accumulate and end by producing a kind of friction that is inconceivable unless one has experienced war."

"Embrace the suck" isn't merely a wisecrack; it's a raw epigram based on encyclopedic experience. Face it, soldier. I've been there. This ain't easy. Now let's deal with it.

A sampling of troop idioms:

"Back to the taxpayers": Navy slang for where a wrecked aircraft gets sent.

Beltway clerk: A derisive term for a Washington political operative or civilian political hatchet man—in other words, someone who trades on his supposed political connections. May refer to so-called "Washington defense experts" who have never served in the armed forces.

"Embrace the suck": Translation: The situation is bad, but deal with it.

Fallujah: An Iraqi city. As slang, however, the phrase "another Fallujah" means a screwed-up place crawling with bad guys.

FOB: Forward Operations Base ("the yard"). Protected area for Iraqi or coalition soldiers.

Fobbits: Derogatory term for soldiers who never leave a FOB.

FUBAR: F***** Up Beyond All Recognition. Fake acronym. A World War II term still in use.

FUBIJAR: A play on FUBAR. F***** Up, But I'm Just A Reservist. A sarcastic jab by a reservist at criticism from a regular.

Groundhog Day: Every day of your tour in Iraq. Terms suggests the days never change—always long and hot, and the same events keep recurring. From the Bill Murray movie Groundhog Day.

Hooah: U.S. Army slang. Actually a shout. Signals approval or solidarity. Means most anything except "no."

John Wayne Driving School: Banging up a Humvee in the process of teaching new soldiers to drive it.

Marineland: Slang for Iraq's Anbar province, which is largely patrolled by U.S. Marines

MOUT: Military Operations in Urban Terrain. A general description for house-to-house searches, raids, and patrols in an urban area.

Semper I: Pejorative Marine lingo for being overly concerned with one's own personal interests.

Semper Knife: Yet another twist on Semper Fi. Means "backstabbing."

Turkey peek: To glance around or over an object or surface, such as a corner or wall. ("Now, once you're in there, do a turkey peek around the wall then move to the next building.")

Excerpted from Embrace the Suck: A Pocket Guide to Milspeak Copyright 2007 by Pamphleteer Press.