Hummable Pop Gets Dark and Theatrical

Hummable Pop Gets Dark and Theatrical 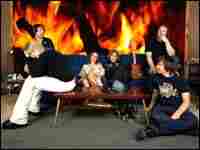 With a sound that's part '70s art-rock and part '60s California chamber-pop, The Besnard Lakes' members draw from the Brian Wilson school of arranging. Led by the husband-and-wife duo of Olga Goreas and Jace Lasek, the Montreal collective possesses a keen ear for epic, experimental rock and sweet boy/girl harmonies. Its inspired debut, The Besnard Lakes Are the Dark Horse, demonstrates a remarkable flair for dramatic shifts between initial fragility and walloping dynamics.

Accompanied by bright, pulsating guitars and plucked violins, "Disaster" opens as an unassuming ballad marked by dark, layered delicacy. Lasek draws on introspective themes of love and troubled relationships while his voice takes a page from the Wilson fakebook. He even incorporates familiar melodic phrasing as he opens, "Baby, I've got some words for you / when you get up in the afternoon." When combined with the rolling swing of the drums and the psychedelic falsetto harmonies, comparisons to The Beach Boys are inevitable.

But as the song's meaning turns sideways, Lasek delves into ominous territory, with heroically crunchy power chords building to controlled distortion and feedback. With its sympathetic pop instrumentation, reverb-drenched string lines, eerie horn fanfare and doomstruck chorus ("You've got disaster on your mind"), the whole package adds up to a powerfully theatrical moment.