Accessibility links
Refugees Find Hope, Film Deal on Soccer Field In suburban Atlanta, a soccer team made up of young refugees from global hot spots fought city hall for a place to play. Now they've won more than that: a book and movie deal. 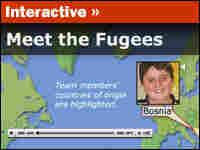 The Fugees, 13 and Under 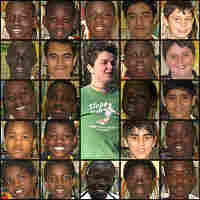 Find Out Where They're From

These are the youngest members of the Fugees soccer club. They play on the 13 and under team. 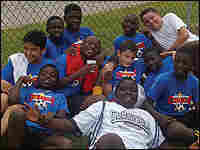 Players relax after a game (they won.) Courtesy of the Fugees Family hide caption 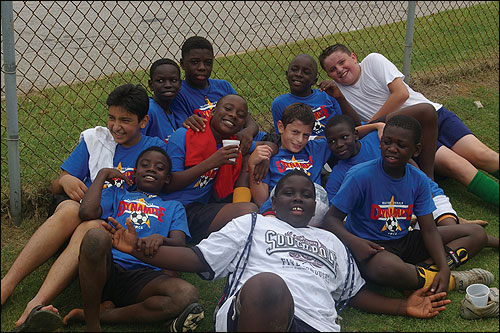 Players relax after a game (they won.)

Courtesy of the Fugees Family

If you want to be a Fugee, you have to follow the rules:

— From the contract each player signs to become a Fugee. 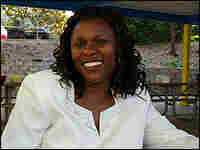 Paula Belegamire fled the Democratic Republic of Congo in 2001 with her six children because of a violent civil war. Her husband is still there. Her son, Grace, is a midfielder for the Fugees. Courtesy of the Fugees Family hide caption

In suburban Atlanta, a soccer team made up of refugees found itself fighting city hall for a place to play. Now, they've won more than that.

Since the publication in January of a New York Times article about their travails, the teammates have also garnered a book and movie deal.

The Fugees, as the players are known, are young boys from global hot spots: They've fled famine, war and other horrors in places such as Sudan, Afghanistan, Bosnia and Burundi. They wound up in the small town of Clarkston, Ga., which has become a center for refugee resettlement due to its access to public transportation, cheap and plentiful housing, and proximity to Atlanta.

The transition to life in America has not been easy for the families in Clarkston's refugee community. But many of the children have bonded as teammates in the Fugees — short for "the refugees."

The team's coach, Luma Mufleh, first brought the kids together through soccer, but she says they have come to rely on each other for much more. They gather in the evenings to practice on Clarkston's Armistead Field.

On the field, "Coach Luma" — as the kids call her — is known to be tough. She makes the players sign a contract, pledging they will not do drugs, wear saggy pants, or use bad language. They vow to try hard and listen. But off the field, the coach is gentle and soft-spoken.

It's not been easy for the Fugees. They've moved from field to field since Mufleh started the team three years ago. Last fall, the city of Clarkston said they could use Armistead Field. But in December, the coach got a letter from the city suspending practice there. That led to public outcry, after The New York Times ran a front-page story about the team and its problems with the city.

Since the recent news coverage, more people have volunteered to help. Mufleh rummages up equipment and uniforms wherever she can find them. Other soccer clubs in Atlanta have donated used cleats and balls. Smith College — Mufleh's alma mater — provided uniforms.

But the biggest source of help arrived in the wake of the Times article. The coach gathered her team together and delivered the news: Universal Studios wanted to put the Fugees' story on the big screen. Universal agreed to a $3 million book and movie deal.

But while the Times article was good news for the Fugees, some in Clarkston were less than exuberant.

Mayor Lee Swaney says the article was not entirely accurate. He says the city temporarily suspended the practice on Armistead Field because adult immigrants — unrelated to the Fugees — were using it. The city mistakenly thought that the older immigrants were part of the Fugees team, and that they were playing at Armistead, which is for youths only, without permission.

"For anybody to say that I wasn't for the refugees or anybody in this city, they don't know what they're talking about," Swaney says.

Swaney says that over the past two-and-a-half decades, Clarkston has been completely transformed from a small Southern town to a diverse place. In 1980, the population was 90 percent white. Today, one in every three residents is foreign-born. Refugees from more than 50 countries have resettled here.

The influx of so many different types of people has led to tensions over the years. Fesseha Sebhatu owns an Eritrean restaurant in a shopping center that caters to immigrants. Called Thriftown, the center also includes a Middle Eastern market and an Abyssinian cafe.

"Everywhere, this difference is not easy," Sebahtu says. "To mix people is not like just milk and water. It's just like oil and water, because they are two different things."

Sebahtu has owned his restaurant for a year and a half. He says he is receiving support now from the city on issues such as permits and licensing for his establishment, but it took a while to get that kind of backing.

"It will take time. It takes time to understand each other and to live together," he says.

The Road to Clarkston

Paula Belegamire is from Kinshasa in the Democratic Republic of Congo (formerly known as Zaire). In 2001, her family fled to Brazzaville, in the neighboring country of the Republic of Congo, to escape the violence of a civil war.

But in Brazzaville, her husband, Joseph Belegamire, was arrested as a political prisoner. Left alone, Paula Belegamire tried her best to care for her family. Their lives were threatened as well. They lived on the streets for a time before sharing one room of a home with many other families. For two years, the children could not go to school.

"Sometimes they are sad, and sometimes they dance in the house because [they are] not doing nothing. No go to school. Only stay in the house all day, sleeping," she recalls, adding that some days, the family had nothing to eat. "They cry. It was so sad."

Belegamire and her six children made it to the United States, but her husband is still in Africa. Her son Grace has not seen his father since he was 5 years old.

"I just remember his face — small, small memories and stuff. I don't know what I remember. It's hard to say," Grace says.

"You know they're all refugees. The entire team is all refugees, and that's a very powerful experience," Mufleh says. "You've left your country, usually because of war. They've all experienced war, and they are all children of war. So it probably makes them a stronger team because they share that experience."