A Dustbowl Lament from an American Chameleon

A Dustbowl Lament from an American Chameleon 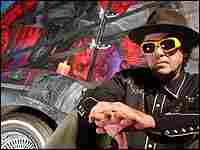 Guitar virtuoso Ry Cooder is a rock chameleon, hopscotching across genres and geographic locations. Always a musician's musician due to his aptitude for blending his sound — a mixture of Tex Mex, blues, surf-rock, jazz and country — Cooder appears comfortable in any project he attempts. So it comes as little surprise that, after explorations into pre-Castro Cuba with the brilliant Buena Vista Social Club and Mambo Sinuendo, Cooder has shifted his focus once again.

His most recent effort, the sprawling 17-song folk tale My Name Is Buddy, revisits the Dustbowl ballad form and Depression-era road songs. The album's story arc follows three animal travelers — Buddy Red Cat, Reverend Tom Toad and Lefty Mouse — on a journey into the American landscape. Cooder's use of animal characters allows his populist song cycle to frame his social commentary from an outsider's perspective.

Even within the confines of musically narrow genres, Cooder allows himself room to stretch, manipulating the song structures of 1930s American music: minstrel folk, country ballads, blues and even the lounge jazz of Chet Baker. Some songs, such as the Woody Guthrie-esque lament "Cardboard Avenue," push the influences together to create a new style that's distinctively Cooder. The song's lazy banjo and junkyard rhythms effectively paint a portrait of hot workdays in the sun and Hooverville-inspired landscapes.

Bringing together a stable of musicians as good as any band Cooder has assembled, My Name Is Buddy finds him reuniting with accordion master Flaco Jimenez, as well as soul singers Terry Evans and Bobby King. He also enlists banjo-playing brothers Pete and Mike Seeger and picks up inspired support from The Chieftains' Paddy Moloney, jazz vibraphonist Stefon Harris and his own son, drummer Joachim Cooder. An inspired musical and literary accomplishment, the result weaves together the sights and sounds of an America long since forgotten.