Accessibility links
Monteverdi's 'The Return of Ul World of Opera presents Claudio Monteverdi's The Return of Ulysses, a brilliant musical take on Homer's "Odyssey" by history's first great opera composer, heard here from the Welsh National Opera in Cardiff with Paul Nilon in the title role.

Monteverdi's 'The Return of Ulysses'

Monteverdi's 'The Return of Ulysses'

From the Welsh National Opera 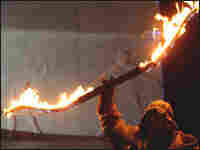 Remember the Coen brothers' film, O Brother, Where Art Thou? The star was George Clooney, playing a fellow with a lot of problems. In fact, the signature tune from the film's soundtrack pretty much says it all about Clooney's character. It's called, "Man of Constant Sorrow."

Clooney plays a man named McGill who's been away from home for a long time. When he finally makes it back, after a harrowing journey, he finds his wife being romanced by another guy. His kids don't even recognize him. If the story sounds familiar, it should. Though he goes by Everett, Mr. McGill's given first name is ... Ulysses.

The movie is based on the epic, The Odyssey, by Homer, and it comes complete with many of Homer's most famous touches, including three sirens and a cyclops. The drama featured on this week's World of Opera is based on the same story. In fact, you might think of Monteverdi's The Return of Ulysses as an early, musical version of Homer's original "man of constant sorrow."

Monteverdi's opera also has something else in common with O Brother, Where Art Thou?. In their film, the Coen brothers used a variety of traditional, American music — often called "American Roots" music. The soundtrack became so popular - and so closely associated with the term "American Roots" — that it almost seemed like the Coen brothers had invented an entirely new musical genre. They didn't, of course, but they certainly brought it squarely into the mainstream.

Monteverdi did something similar — and even more remarkable. He was one of the first composers ever to write an opera and, with his Orfeo in 1607, he was almost certainly the first to compose a truly great opera. In doing so, Monteverdi brought a genuinely new form of music into the mainstream. All of his operas, including The Return of Ulysses, have played a large part in keeping it there ever since.

The production we're featuring on World of Opera is from the Welsh National Opera, in Cardiff. It stars tenor Paul Nilon as a smoothly romantic Ulysses, and soprano Sara Fulgoni as the long-suffering Penelope.

The Story of Monteverdi's 'The Return of Ulysses' 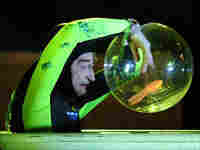 The sea-god Neptune, played by Clive Bayley, holds the fate of many in his hands — or at least the fate of one goldfish — in 'The Return of Ulysses.' Photo: Catherine Ashmore hide caption 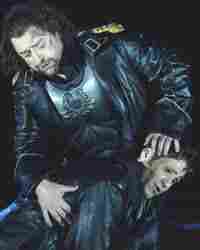 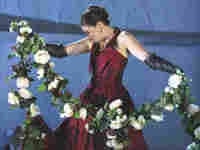 As Penelope, Sara Fulgoni has many admirers, at least three of whom wind up dead when her husband Ulysses returns. Photo: Catherine Ashmore hide caption

BACKGROUND: The birth of opera, in the early 1600s, wasn't an overnight event. It was an evolutionary process, involving many different styles and composers. But when it comes to opera's founding fathers, Monteverdi stood head and shoulders above all the others. His 1607 opera Orfeo was the first work to fully reveal opera's potential — its capacity to combine profound artistic expression with flat-out, crowd-pleasing entertainment.

Monteverdi accomplished this while opera was so new it barely had a name. Orfeo was a large, complex work, featuring a big cast and an orchestra full of exotic instruments — all paid for by wealthy benefactors and presented for their private entertainment. His last opera, The Coronation of Poppea, was a much smaller, less expensive affair. Why? One reason was money. By then, more than 30 years later, people were buying tickets to see opera, and there were profits to be made!

The Return of Ulysses is in five acts, with a Prologue. In the production from Cardiff, it's performed in two parts, with a break after Act Two.

PROLOGUE & ACTS 1-2: The Prologue features a lively discussion among Human Frailty and the powers of Time, Fortune, and Love. With the beginning of Act One, we meet Penelope. Her husband Ulysses left home to fight the Trojan War, but Troy fell more than ten years ago and Ulysses still hasn't come back. Three men — the "suitors" — are after Penelope. She has always turned them down while waiting faithfully, and often tearfully, for Ulysses. Her nurse Ericlea tries to console her, but fails. Meanwhile, one of the household maids, Melanto, has no problems with her love life. She's taken up with the shepherd Eurimaco.

The scene changes and we meet Ulysses lying asleep on a beach, where the gods Neptune and Jupiter have stranded him. The goddess Minerva appears and tells him he may now return to his wife. The one catch is that he must go in disguise, as an old beggar, to confront Penelope and the suitors anonymously.

In the next scene the swineherd Eumete argues with the social outcast Iro, a confidant of the suitors, who quickly leaves. Ulysses arrives, in his beggar disguise. Eumete used to work for Ulysses, but now he doesn't recognize his old boss and he's concerned about Ulysses' fate. The "beggar" tells him not to worry; his master will soon be back. When Ulysses' son Telemaco appears, the swineherd tells him about his father's imminent return. Telemaco orders Eumete to the palace to give Penelope the news. Then Ulysses reveals himself to Telemaco, and the two are reunited. Ulysses sends Telemaco off to his mother, saying he'll join them soon, but still in disguise.

ACTS 3-5: At the Palace, the lovers Melanto and Eurimaco are both amazed at Penelope's continued loyalty to Ulysses — especially considering how much attention she's been getting. The three suitors — Antinoo, Pisandro and Anfinomo — all show up on her doorstep at the same time. Again, each one tries to win Penelope over. They all fail. Eumete then turns up, saying Telemaco is on his way and may be bringing Ulysses with him. The suitors consider killing Telemaco but an omen warns them against it.

In the next scene Ulysses is in a wooded grove, with the goddess Minerva. She tells him not to worry about the suitors. Minerva says Penelope herself will have an idea that gets them out of the picture once and for all.

The scene changes back to Penelope's palace. Telemaco assures her that Ulysses will arrive shortly and he does, still in disguise as a beggar and trailing Eumete behind him. They're greeted roughly by the three suitors and their ill-mannered sidekick, Iro, who challenges Ulysses to a fight. The old beggar beats him easily, taking everyone by surprise. Intrigued, Penelope invites this beggar to stay on.

The suitors are still determined that one of them will have Penelope. She suggests a contest. The idea is actually Minverva's. In true, goddesslike fashion, she has planted the notion in Penelope's mind. Penelope produces a bow she says once belonged to her husband, Ulysses. She says she'll pledge herself to any man who can string the bow. The suitors all attempt it but none of them has the strength, and the bow stays unstrung. Ulysses, still in disguise, suggests that he might give it a try. He strings the bow easily. He also uses it immediately — to kill all three of the suitors. In a bravura solo scene, Iro grieves over the death of his three friends, and commits suicide.

Ulysses has won the day — and, it would seem, his wife. But Penelope is grieving. She's promised herself to whomever could string the bow, and still thinks her champion is an unsightly old beggar. Eumete tries to persuade her that the beggar is actually Ulysses. She thinks he's lying, and tells him so. Telemaco also tries to convince her, but she won't listen to him, either.

The gods then discuss Ulysses' fate. Ultimately, they decide the poor guy has suffered enough — what with that whole "Odyssey" thing and all. With the gods approval, Ulysses enters Penelope's room without his disguise. At first, she still refuses to believe that it's actually him. Then, Ulysses accurately describes the embroidered cover that was on their wedding bed. At that, Penelope is convinced. Husband and wife are are finally reunited in a sensuous duet to close the opera.

More about Monteverdi, from NPR's 'Milestones of the Millenium'