Accessibility links
The Measure of a Man and a Father Thurman Weaver worked as a factory worker and a chauffeur. But his greatest life's work may have been his family. Recently, Thurman's son, Dr. William Weaver, spoke of his father.

Listen
The Measure of a Man and a Father 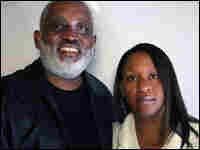 Dr. Weaver's recording was made in a StoryCorps Griot booth — named for the West African tradition of the griot, or storyteller. Earlier this year, StoryCorps launched the Griot program to focus on recording the stories of African-Americans.

Thurman Weaver worked as a janitor and a chauffeur. But his greatest life's work may have been his family. Recently, Thurman's son, Dr. William Weaver, spoke of his father in Atlanta.

Now 57, Weaver is the chairman of surgery at Atlanta's Morehouse School of Medicine. But he still measures himself against his father.

"My father was everything to me," William Weaver told his daughter, Kimberly. Before Thurman Weaver died, William recalled, "every decision I made, I'd always call him, and he would never tell what to do.

"But he would always listen and say, 'Well, what do you want to do?' And he made me feel that I could do anything I wanted to do."

That spirit was evident when Weaver was in high school, and struggling to learn algebra. Sitting at the family's kitchen table, the frustration built, and Weaver gave up. His father offered to help, but Weaver answered, "They didn't even have algebra in your day."

William Weaver went off to bed, and his father turned to the algebra books on the table. At 4 a.m., he shook his son awake and sat him back down at the table.

"What he had done," Weaver recalls, "was sit up all night and read the algebra book. And then he explained the problems to me so I could do them, and understand them."

"To this day," Weaver said, "I live my life trying to be half the man my father was, just half the man. And I would be a success if my children loved me half as much as I loved my father."

Audio produced for Morning Edition by Katie Simon. The senior producer for StoryCorps is Sarah Kramer.