Accessibility links
The Great Flood: Grand Forks 10 Years On In the spring of 1997, floodwaters rose out of the Red River, forcing what was then the largest evacuation of an American city. Now the community of Grand Forks looks back on the effects of the flood.

Listen to Ned Wharton's original report on the 1997 flood

Ten years ago this week, the Red River of the North crested at more than 54 feet. More than 50,000 people were evacuated from the towns of Grand Forks, N.D., and East Grand Forks, Minn. It was the largest displacement of an American city prior to Hurricane Katrina.

In looking back on the disaster a decade later, residents remember that virtually no one saw it coming.

"We were all in denial," recalls Mike Jacobs, the editor and publisher of The Grand Forks Herald. "I remember my own epiphany occurred on the first Friday in April when I was sandbagging and a lawyer that I know was in front of me in the line, and he was handing bags to me, and I was handing them on to somebody else. And it started to rain, and then the rain turned to sleet, and then the sleet turned to ice." 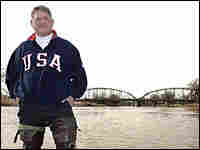 In 1997 the Red River rose to 54 feet. A decade later, East Grand Forks Mayor Lynn Stauss is able to stand in the river in hip waders. Bill Alkofer hide caption 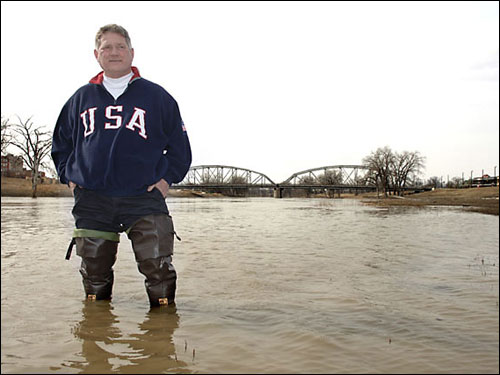 In 1997 the Red River rose to 54 feet. A decade later, East Grand Forks Mayor Lynn Stauss is able to stand in the river in hip waders.

It was then, Jacobs says, that he realized, "we're probably not going to win this one."

Pat Owens was the mayor at the time. She had been in office less than a year when the flood hit.

"I could see the water flowing out of the manholes, it was everywhere," she recalls. "I just thought, 'Oh my goodness, if I evacuate this city and nothing happens they're gonna impeach me. But if I don't, we're going to lose lives.'"

The water rose above the ground floor of the businesses downtown. But the disaster didn't end there. A fire broke out in the historic Security Building. The flames quickly spread and, ultimately, damaged or destroyed 11 buildings in the heart of the city.

"There were chunks of plywood from the building going up in the air, in the heat column from this fire [as high as] 400 feet up," recalls Bruce Hoeger, one of the firefighters. "And some of them were landing on buildings, and others were landing in the water, so that was quite a bit of the spread right there."

Owens says things were happening so fast that she had little time to think. She remembers, "You had to just keep going, going, going, and all I could say is that 'We need to save all the people.'" 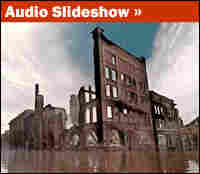 See images from the 1997 flood and how the town recast itself.

Help came from all corners of the country, and the highest levels of government. President Clinton stood beside Mayor Owens in a visit to the Grand Forks Air Force Base.

"Just his being there touched me so much," recalls Owens. "He cared enough to come to our small, little city and tell us that he would stay by our side all through it."

And the help they received will never be forgotten. So when Hurricane Katrina hit, the people hit by flood and fire saw a chance to give something back. Grand Forks adopted the city of Biloxi, Miss.

"I think it's important to utilize the experience from those people who went through those disasters, like our fire chief, police chief and public works directors," says Michael Brown, the current mayor of Grand Forks (no relation to the former FEMA director of the same name.) "So we went to Biloxi and said, 'This is what we have learned.'"

In the 10 years since the floods, the economies of both cities have bounced back. New businesses — an Applebee's restaurant, a Cabela's outdoor outfitter — mix with old establishments in East Grand Forks. In Grand Forks, an Amazon.com call center employs 200. And a Danish company, LM Glasfiber, employs 750 workers to make turbine blades for wind farms.

This week, a series of events is scheduled to mark the 10th anniversary of the flood. James Lee Witt, the former head of FEMA, will be the grand marshal in a parade.

Pat Owens will be back, even though she became known as the "flood mayor" and was not re-elected. She now lives in Florida.

"I'll never forget these people," she says. "I never had enough time to thank them individually because there were so many of them. But I sure do appreciate them."