Accessibility links
Ornette Coleman Wins Music Pulitzer Ornette Coleman, 77, has won the 2007 Pulitzer Prize for music. As a musician, he has erased as many borders as he has crossed. Whether he's writing symphonic works, chamber music, or playing alto saxophone, trumpet or violin, Coleman continues to surprise audiences.

Lawrence Wright The Looming Tower: Al-Qaeda and the Road to 9/11 (general non-fiction)

Debby Applegate The Most Famous Man in America: The Biography of Henry Ward Beecher (biography)

Ornette Coleman has won the Pulitzer Prize for music with his recording Sound Grammar, a document of a 2005 concert recorded live in Italy. 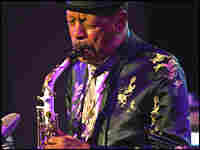 Coleman's music was not among the 140 music nominees. Pulitzer panelists used their prerogative to skirt traditional rules by purchasing the CD and nominating the 77-year-old jazz master. This is the first time a recording has won the music Pulitzer, and a first for purely improvised music.

The concert features an unorthodox line-up of instruments, including two double basses (one plucked, the other bowed), Colemans son Denardo on drums, and Coleman himself playing alto saxophone and trumpet.

Coleman has continued to shake up the jazz world ever since releasing his innovative recording The Shape of Jazz to Come in 1959.

Born in Fort Worth, Texas, in 1930, Coleman received his first saxophone at age 14. His mother saved money to buy the instrument by working as a seamstress. At first, Coleman struggled to find his own sound on the alto saxophone, but eventually developed his own formulas of composition, breaking down traditional definitions of harmony and melody.

Coleman has written music outside of the jazz realm, including string quartets, music for dance, woodwind quintets, and in the early 1970s, a symphony called Skies of America, composed with support from his Guggenheim Foundation Grant.

In 1994, Coleman earned a MacArthur Genius award, and has been inducted into the American Academy of Arts and Letters.