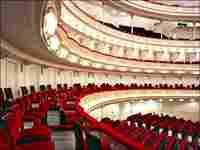 More about the Performers ...

Verdi had a special fondness for the baritone voice and in many of his operas, the baritone roles get some of the best arias. In Il Corsaro it's 'Cento leggiadre vergini,' in which the bad guy, Seid, tells us what he has sacrificed to win his true love.

Verdi's bombastic, 1848 opera Il Corsaro, or The Pirate, is a rarity several times over.

The world of pirates – dashing, seafaring pirates, not today's digital, Internet pirates – has always made great material for action and adventure stories, and there are plenty of examples. From Eroll Flynn in the 1935 Hollywood classic Captain Blood, to Johnny Depp in the recent Pirates of the Caribbean films, pirates have made great movie heroes. The term "swashbuckler" seems to have been invented for them, and Captain Blood also features some great, swashbuckling music, with a score by Oscar-winner Erich Wolfgang Korngold.

Somehow, though, pirates haven't been so popular at the opera, except maybe in "backstory." There are plenty of operas that start off after their characters have been victimized by pirates. Often they've been kidnapped, hauled off to some foreign land, and sold to the local despot. Then, once the opera's action begins, they're rescued in heroic fashion, or risk death to escape. But there are very few operas with pirates themselves in the leading roles, and that alone makes Verdi's Il Corsaro a bit of a rare bird.

Verdi's pirate opera is also unusual in other ways. It wasn't exactly a smash hit when it was premiered in 1848, and the composer was unaccustomed to flops. More strangely, Verdi didn't seem to care much about the piece. He nearly always micromanaged the premieres of his operas, but he didn't even bother to attend this one. Before long, the opera fell off the map altogether.

In some ways, we'll admit, the fate of Il Corsaro is understandable. The story has a few holes, and Verdi wrote plenty of operas with more compelling music. But when it comes to opera, Verdi on his worst day was more than a match for just about everyone else in the business. So any chance to hear one of the Verdi operas that generally fly under the radar is a welcome opportunity.

On this edition of World of Opera host Lisa Simeone brings us Il Corsaro from an organization that specializes in deserving but neglected operas. Since 1972, Opera Orchestra of New York has brought dozens of such works to life in concert performances at one of the world's great musical venues, New York City's Carnegie Hall.

The Story of Verdi's 'Il Corsaro'

Composer Giuseppe Verdi sat for this photo in 1850 at age 37, just two years after he wrote Il Corsaro. hide caption

BACKGROUND: Verdi was a notorious perfectionist when it came to staging his operas. He got personally involved in every detail. But with Il Corsaro (The Pirate), he made an exception. The composer expressed interest in Byron's poem "The Corsaire" as early as 1844, but it was several years before he got around to composing the opera, working with a libretto by Francesco Maria Piave. Meanwhile, Verdi was caught up in a squabble between two publishers doing battle over his work. Il Corsaro was written for the publisher who lost that battle — at least in the composer's eyes — and Verdi may have been anxious to get past it. In any case, when he finished the score in 1848, and turned it over to the publisher, he apparently had no idea where or when it would be produced. When it premiered at the Grand Theater in Trieste later that year, Verdi didn't even bother to attend the first performance. He may have known exactly what he was doing. As it turns out, the opera was poorly received — an unusual occurrence for Verdi. It quickly fell out of favor, and even today it's a bit of a rarity.

Act 1: The story is set in the early 1800s, with the action taking place on a Greek island in the Aegean and in the Turkish city of Corone. Act One begins on the Greek island controlled by the corsairs, or pirates. There's a raucous, offstage chorus introducing Corrado, the chief corsair, who is in exile. He receives a letter containing military intelligence about the Turkish Pasha, Seid. It convinces him to set sail with his comrades, and he immediately starts rallying the troops.

The next scene takes place at the home of Medora, Corrado's girlfriend. She's alone, and anxious for his return. She picks up her harp and starts singing a beautiful, but vaguely sinister aria. Some sixth sense seems to be telling her that things are bound to turn out badly. When Corrado finally arrives, the two sing a duet that captures both the serenity of their love and the uncertainty of their future. Corrado then leaves to confront the Pasha.

Act 2: In Corone, the slave girls in Pasha Seid's harem are looking after Gulnara, the Pasha's favorite. Gulnara, though, isn't happy about the Pasha's attentions. She chafes at life in the harem, and longs for freedom and true love. A eunuch brings Gulnara an invitation to a celebratory banquet – anticipating the Pasha's victory in the impending sea battle with the corsairs.

At the banquet, a slave asks the Pasha if a Dervish might be admitted. The Dervish has apparently escaped from the corsairs. Seid grants him an audience, and questions him. Suddenly everyone notices flames at sea. The Pasha's fleet is burning. The Dervish whips off his disguise, and reveals that he is Corrado. His corsairs invade the banquet, and a battle takes place. At first, it seems Corrado and his men will win, but he makes a fatal mistake. Seeing that the harem is burning, Corrado decides to rescue Gulnara and the other women. This gives the Pasha and his men time to regroup. They take Corrado prisoner, and he's condemned to a grisly death.

Act 3: Seid is enjoying his victory, but isn't entirely satisfied. He's in love with Gulnara, and is afraid she's fallen for the dashing Corrado. He sends for her, and she tells him he's right. Seid threatens Gulnara, but she defies him and the Pasha storms out of the room.

Meanwhile, Corrado is in prison and assumes he is doomed. Gulnara bribes a guard to let her into his cell. She vows to help him, saying she herself will kill Seid. Corrado turns down her offer, citing his honor as a combatant. He also senses her deep feelings for him, and tells her that he's in love with Medora. Gulnara leaves, and in a brief interlude we again hear the stormy music that opened the Prelude. This time, the music accompanies a murder. Gulnara returns, and says she has killed the Pasha. With their enemy gone, she and Corrado resolve to escape together to the corsairs' island.

The final scene takes place on the island, where Medoro is near death. She's convinced that she'll never see Corrado again, and has taken poison. The ship carrying Gulnara and Corrado appears in the distance. When they arrive, Corrado and Medora throw themselves into each other's arms, but their joy doesn't last for long. Medora dies. With his men trying to stop him, Corrado leaps from a cliff into the sea as the opera ends.