Accessibility links
Cases Of Forced Abortions Surface In China Dozens of women in southwest China have recently been forced into abortions, some late in their pregnancies. It's not the first time a local government has been accused of such an action, but it's surprising because China has relaxed its law that limits each family to one child. 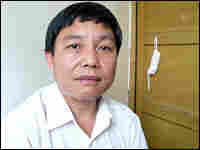 Pastor Liang Yage's wife was forced to abort their baby seven months into her pregnancy. The couple already have one child, a 12-year-old boy. They were told that having another child would contravene China's one-child policy. Louisa Lim, NPR hide caption 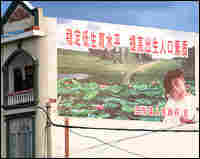 A slogan on a village building outside Baise in southwest China, reads, "Keep the birth rate low to enhance the quality of the population." Louisa Lim, NPR hide caption 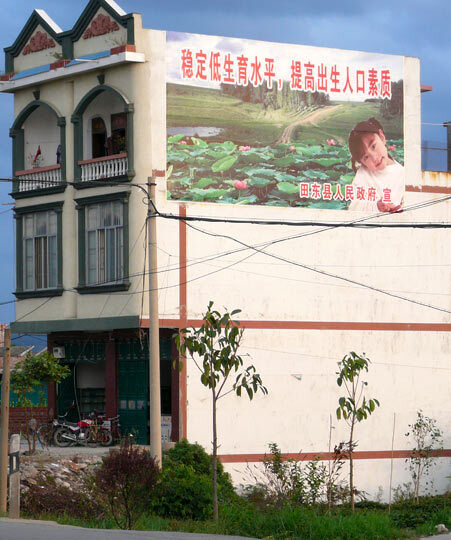 A slogan on a village building outside Baise in southwest China, reads, "Keep the birth rate low to enhance the quality of the population."

During the past week, dozens of women in southwest China have been forced to have abortions even as late as nine months into the pregnancy, according to evidence uncovered by NPR.

China's strict family planning laws permit urban married couples to have only one child each, but in some of the recent cases — in Guangxi Province — women say they were forced to abort what would have been their first child because they were unmarried. The forced abortions are all the more shocking because family planning laws have generally been relaxed in China, with many families having two children.

Liang Yage and his wife Wei Linrong had one child and believed that — like many other couples — they could pay a fine and keep their second baby. Wei was 7 months pregnant when 10 family planning officials visited her at home on April 16.

Liang describes how they told her that she would have to have an abortion, "You don't have any more room for maneuver," he says they told her. "If you don't go [to the hospital], we'll carry you." The couple was then driven to Youjiang district maternity hospital in Baise city.

"I was scared," Wei told NPR. "The hospital was full of women who'd been brought in forcibly. There wasn't a single spare bed. The family planning people said forced abortions and forced sterilizations were both being carried out. We saw women being pulled in one by one."

The couple was given a consent agreement to sign. When Liang refused, family planning officials signed it for him. He and his wife are devout Christians — he is a pastor — and they don't agree with abortion.

The officials gave Wei three injections in the lower abdomen. Contractions started the next afternoon, and continued for almost 16 hours. Her child was stillborn.

"I asked the doctor if it was a boy or girl," Wei said. "The doctor said it was a boy. My friends who were beside me said the baby's body was completely black. I felt desolate, so I didn't look up to see the baby."

Medical sources say fetuses aborted in this manner would have been dead for some time, so the tissue is necrotic and thus dark in color.

"The nurses dealt with the body like it was rubbish," Wei said. "They wrapped it up in a black plastic bag and threw it in the trash."

This was also the treatment given to the stillborn baby of He Caigan. Family planning officials turned up at her house, in the countryside several hours outside Baise, before dawn on April 17 to force her to go to the hospital. This would have been her first baby — but she hadn't married the father, in contravention of family planning laws. She was already 9 months pregnant, just days away from delivery.

"They told me I'm too young, I couldn't keep the child and I should have an abortion," she said. "I'm too young to get a marriage certificate — I'm only 19 and my boyfriend's only 21."

After the forced abortion, her boyfriend left her. She said that she's still in great physical pain and that her life had been ruined.

An eyewitness, who requested anonymity for fear of the consequences, said that he counted 41 occupied beds on just one floor of the maternity hospital in Baise and that he believed none of the women he saw had come to the hospital of their own free will.

Coerced abortions such as these were not unusual after China's one-child policy was first introduced in 1980. But a law passed five years ago guarantees China's citizens a degree of choice in family planning matters. When contacted for comment, an official at China's State Commission for Population and Family Planning said she'd heard nothing about forced abortions in Guangxi and asked for more details. But in Baise, a family planning official surnamed Nong acknowledged that such behavior would violate regulations. Despite the fact that these allegations refer to events that happened just within the last week, he said an investigation had already been held.

"We were very surprised to hear of these accusations," Nong said, "but our investigation concluded some individuals who were dissatisfied with our family planning policies were fabricating stories. These facts simply don't exist. We really love and care for women here."

Official figures published by the Xinhua news agency shed some light on why a forced abortion campaign might be judged necessary. They show that the Baise government missed its family planning targets last year. The recorded birth rate was 13.61 percent, slightly higher than the goal of 13.5 percent. This is significant because the career prospects of local officials depend upon meeting these goals.

Wei Linrong and her husband Liang Yage, were incensed by their treatment, seeing it as little short of murder.

"I think their methods are too cruel," said Wei, "my heart really hurts. Such a tiny baby, it was innocent. And they killed it."

Liang and his wife risked further official disapproval by contacting a Christian group overseas to publicize their plight. China may once have depended on its state apparatus of control and fear to silence those who suffer human rights abuses at the hands of its officials. But China's victims are angry, and they want their voices to be heard.