Listen
Benny Golson: From Jazz to Hollywood and Back

Getting fired (at the right time) ...

'I Remember Clifford,' a ballad written to commemorate his friend, trumpeter and composer Clifford Brown 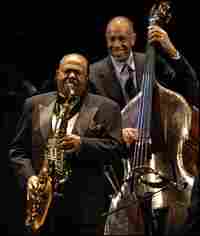 Backed by bassist John Clayton, Benny Golson steps up for a solo during the Kennedy Center's Jazz in Our Time celebration in March 2007. Margot Schulman hide caption 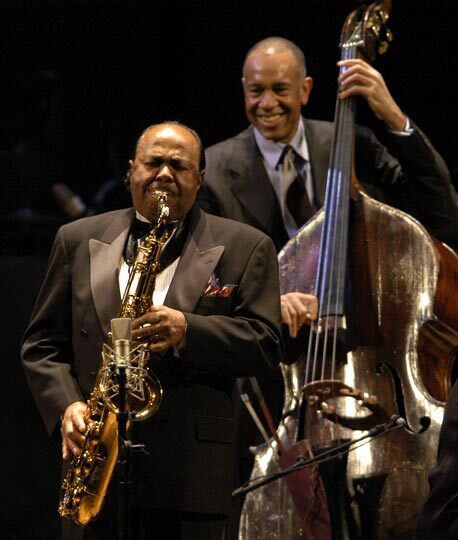 Backed by bassist John Clayton, Benny Golson steps up for a solo during the Kennedy Center's Jazz in Our Time celebration in March 2007.

Saxophone player Benny Golson played with jazz greats Dizzy Gillespie and Art Blakey, and wrote music for the TV shows M*A*S*H and Mission Impossible. He talks about his role in reshaping Blakey's band as well as the bit part in a Stephen Spielberg movie that helped revitalize his career.

Born Jan. 25, 1929, in Philadelphia, Golson was at the center of the jazz world during the late 1950s and early '60s. While much admired as a soloist, it is his record as a jazz composer that is almost unmatched among living musicians, with the exception of Herbie Hancock.

In the span of just a few years, Golson wrote no fewer than eight tunes regarded as jazz standards. They include "Killer Joe," "Along Came Betty," "Stablemates," "Whisper Not," "Blues March," "Five Spot After Dark," "Are You Real?" and "I Remember Clifford." The latter was a ballad written to commemorate his friend Clifford Brown, a brilliant trumpeter and composer who was killed at age 25 in a car accident.

Golson grew up playing tenor saxophone in regular jam sessions with a remarkable array of other future giants of jazz. John Coltrane, Philly Joe Jones, Red Garland, Brown and others were regulars at those sessions.

"During the summer — no school. So we had jam sessions almost every day," Golson remembers. "My mother had a linoleum rug in the living room. We wore that rug out!"

Golson studied music at Howard University, graduating in 1950, though he says that jazz was frowned upon at the time by the music department there. Golson's education in jazz came in jam sessions, and on the road.

As a young man, he toured and recorded with the rhythm and blues outfits of "Bull Moose" Jackson and Earl Bostic. Getting fired by Bostic allowed Golson to take the invitation of Quincy Jones to join Dizzy Gillespie's band. In Gillespie's band, Golson played alongside another young Philadelphian, trumpeter Lee Morgan, with whom he'd soon make several landmark recordings — including "I Remember Clifford."

Golson played a central role in the creation of Art Blakey and the Jazz Messengers' Moanin'. That 1958 record is one of the landmark albums in the story of jazz, and was one of Blakey's own favorites from his group's 46-year history. After talking Blakey into replacing his entire band with musicians he knew from Philadelphia, Golson created tunes and arrangements that show off Blakey's dynamic personality as a drummer — in particular on "Blues March" and "The Drum Thunder Suite." One day when the band was on tour in Columbus, Ohio, Golson goaded pianist Bobby Timmons into finishing a now classic title tune, "Moanin.'"

During this period, Golson also recorded several albums of his own, including "Benny Golson's New York Scene" in 1957. After two years with Blakey's Jazz Messengers, he joined trumpeter Art Farmer in forming a group called the Jazztet.

By the mid-1960s, though, Golson was no longer at the vanguard of jazz. In 1967 — three years after John Coltrane's "A Love Supreme" — Golson did a record that covered the theme to "The Magnificent Seven," a Cool Whip ad, and other arrangements that echoed the bachelor pad music of Juan Garcia Esquivel.

Unhappy with his sound on the saxophone, Golson again heeded the call of his friend Quincy Jones — who this time urged Golson to go to Hollywood to write for television. Soon he was cranking out music for episodes of shows including M*A*S*H, The Partridge Family, The Mod Squad and Mission Impossible.

Golson enjoyed the work, which he recalls as totally different from his work in jazz.

"You can write quite freely, using all kinds of techniques: pan-diatonic writing, binary and trinary chords — things that go beyond what you do in jazz," he says. "Twentieth Century Fox, they were like the Rolls Royce. You'd have the picture playing while you were recording the music, so you'd see it fit. But [at] Columbia — like The Partridge Family — you only saw on paper what you were supposed to do. You never saw the images. The only time you heard the music with the images was when it came on TV, like everybody else."

Wrapped up in writing music for television, film and commercials, Golson says, he didn't play his saxophone for seven years. Then he "got the itch" again, though he says it took him years to become comfortable with his sax.

Since his return to jazz, he's recorded a fresh catalog of albums — most recently a CD called Terminal 1, inspired by his role in Steven Spielberg's 2004 film, The Terminal, which starred Tom Hanks and Catherine Zeta-Jones.

Golson's late career commissions have also included a violin piece for Itzhak Perlman. In 1996, Golson was named a Jazz Master by the National Endowment for the Arts.