Accessibility links
Bird's Eye Photographer Shoots from His Cessna Aerial photographer Michael Collier captures radiant landscape images of the Earth from a single-engine airplane, all the while steering the aircraft with his feet. 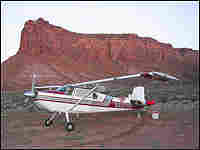 Collier's Cessna parked by a butte. Collier and his plane are both in their 50s. Howard Berkes, NPR hide caption 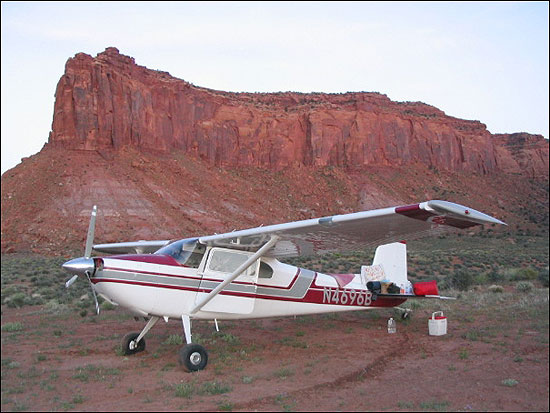 Collier's Cessna parked by a butte. Collier and his plane are both in their 50s.

Arizona physician Michael Collier spends every other week combining geology, photography and aeronautics, in a three-decade quest to tell the earth's "stories" with aerial images.

"I want people to see beauty in the landscape," Collier says. "If they can start there and realize that there are tendrils of information, that there are stories buried in it, then I've done the work I'm supposed to be doing."

That work involves flying a 52-year-old single-engine Cessna 180 from Maine to Mexico and Honduras to Alaska. At 56, Collier is only slightly older than the plane. Together, the pilot and the aircraft have captured thousands of aerial images used in textbooks, magazines, geologic exhibits and on government maps. There are also 13 books filled with Collier's photographs, including Over the Mountains, An Aerial View of Geology (Mikaya Press), the first in a new series of picture books focused on the evolution of landscapes.

Steering with Feet, Bracing for Nausea

Collier relates by taking flight during the angled light of early morning and early evening. He leans out the open window of his Cessna, cradling a Pentax film camera in his hands and peering through the viewfinder, while steering the aircraft with his feet.

"The plane is one of the world's more finicky tripods, expensive tripods. And I use it to position myself in three dimensions," the geologist and pilot explains. He steers into steep dips and hairpin turns, jockeying the plane for the perfect combination of light, shadow and landscape. He's also trying to get the Cessna's overhead wing and struts out of the way.

That makes for some nausea-inducing, white-knuckled flying, for anyone willing to go along. But the aerobatics produce stunning images, especially in the prime 20 minutes of dusk and dawn when angled light brings out detail and color.

"The texture of the light becomes richer ... It's taking on more of a fullness, almost a creaminess ... The reds start coming out. And that's the golden hour."

The golden hour is fleeting so Collier's flying and photography become frantic.

"It makes you desperate. It makes you crazy to want to be everywhere at that last moment ... And you're scurrying from here to there to get as much as you can in the last five minutes, three minutes, two minutes of light."

"And then it fades," Collier says softly. "And you realize ... you have to land."

The flying and photography are so tricky and spontaneous that Collier doesn't trust anyone else at his Cessna's controls.

"I'm doing it perfectly instinctually," Collier explains. "I can't tell (someone else) fast enough to turn left 40 degrees and drop 300 feet and give me a left wing up and put it into a 40 degree bank. It has to be something that I'm doing."

On a recent two-day flight over the dramatic red-rock canyon country of southeastern Utah, the photographer leaned out the open window of the plane, gazing through the viewfinder of his Pentax as he steered the plane with foot pedals. At one point, the Cessna headed straight toward a sandstone wall 100 stories high. But Collier looked up in plenty of time.

"I'll try not to fly into the cliffs," he jokes. "It's considered bad form."

There are regular references to the risks of aerial photography. "Maybe 30 seconds will go by between my thinking about 'Where am I going to put this down if the motor blows up?'" Collier notes during the flight. "It's undesirable. In 4,000 hours in this plane, it's happened once."

But when the light and landscape are right Collier focuses on the images creeping into the viewfinder as the plane swerves and drops. He gets very excited about what he sees, especially when the sky and sandstone begin to glow.

"This is beautiful light, exquisite light!" he exclaims over a southern Utah canyon. "The images I'm taking now in this soft 'Rembrandt light,' as I call it, are so warm. If I can engage people who are looking at these pictures to say, 'That landscape is glowing from within. I think I like this landscape,' they might want to learn about it a little bit more."

But Collier says he's not out to turn curious admirers into activists, who will try to protect the landscapes appearing in his photographs.

"I'm not polemic in these pictures," he says. "I figure the landscape ought to be given a chance to speak for itself and the pictures showing this glowing from within help it to do that."

Helping landscape speak is time-consuming and costly. Collier took close to 400 photographs on his recent Utah flight. He flew 14 hours round-trip from his home in Flagstaff, Ariz., to Salt Lake City to pick up a passenger, and then on to the mountain, canyon and desert country south of Green River, Utah. It costs about $130 an hour to keep the Cessna flying. All that effort and film resulted in about four hours of prime light and five very good photographs worth publishing.

A 'Ridiculously Inefficient Way to Get Images'

"It's absurd, but it's the way that you do it," Collier explains. "It's a ridiculously inefficient way to get images but it's what it takes. It's why there aren't a lot of similar people stupid enough to be doing what I'm doing."

Collier's work is recognized for both artistic and scientific values. An exhibit of 45 photographs, entitled Stones from the Sky, appears at the Washington, D.C., offices of the American Association for the Advancement of Science from June 7 to Sept. 14, 2007. The American Geological Institute honored Collier with a 2005 award for increasing "public understanding of geology."

All this might seem strange for someone who spends at least half his time working as a family physician.

'Over the Mountains,' by Michael Collier
A Collier Photo Exhibition 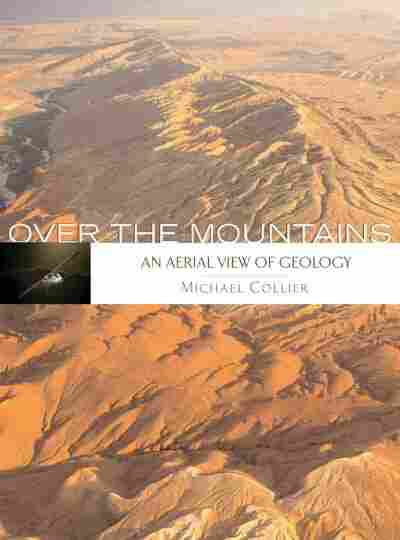 An Aerial View of Geology