Accessibility links
Profiling the Father of G-Funk Producer Dr. Dre is one of the most important and influential figures in rap music, known for popularizing the distinct West Coast rap sound, as author Ronin Ro explains in his new biography.

Listen
Profiling the Father of G-Funk

Producer Dr. Dre is one of the most important and influential figures in rap music, known for popularizing the distinct West Coast rap sound, as author Ronin Ro explains in his new biography. 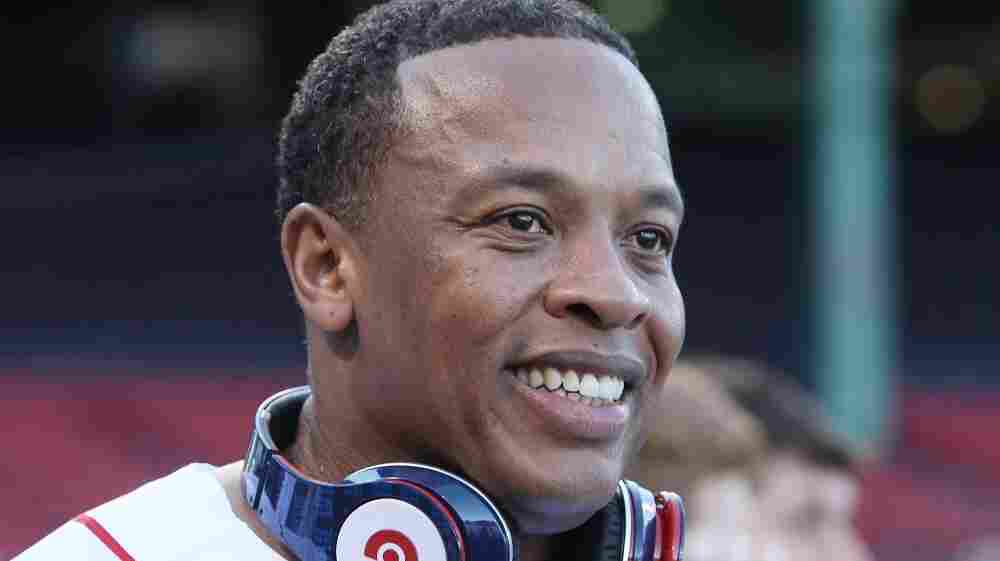 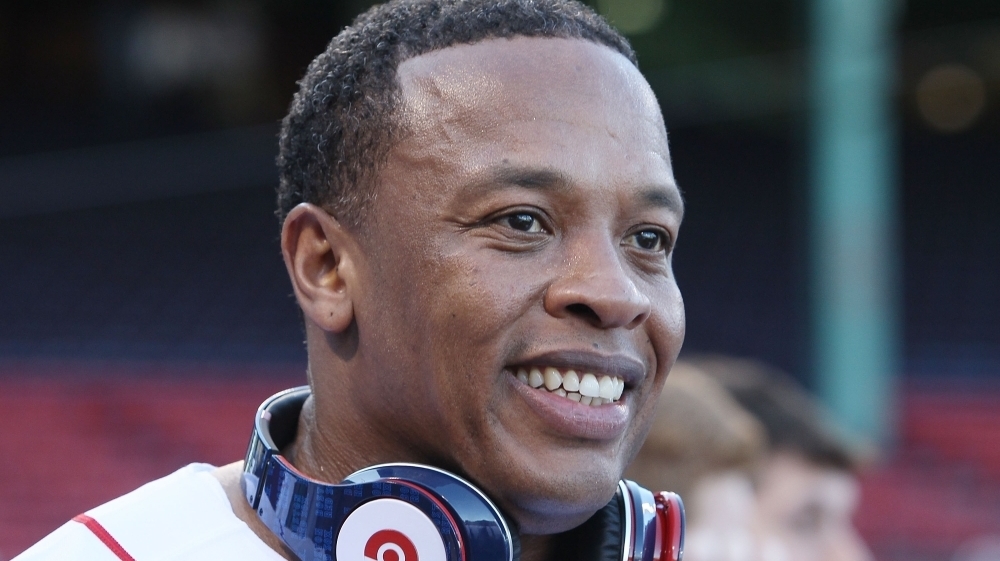 If you want to make your funk the G-funk, then you need to call on Dr. Dre. In the early '90s, the Los Angeles producer almost single-handedly crafted the new G-funk rap sound. Dre made his first hits with Ice Cube and the gangster hip-hop crew, N.W.A. He dropped his first solo disc, "The Chronic," in 1992. It was just one of his many hits during and after his days with N.W.A. Dr. Dre's patented mix of George Clinton-ish funk and (unintelligible) hip-hop beat made him one of rap music's most important artists.

Dr. DRE: (Rapping) Mr. Busta, where you at? Can't scrap a lick, so I know you got (unintelligible)…

COX: Dr. Dre also has a talent for making stars. He discovered Snoop Dogg and helped rocket Eminem to rap stardom. He's thought up all sorts of controversies with record labels and fellow rappers to remain one of the steadiest forces in hip-hop music. NPR's Farai Chideya spoke with Ronin Ro about his new biography of Dre.

FARAI CHIDEYA: Who is Dr. Dre in terms of who he was when he first got into hip-hop?

Mr. RONIN RO (Author, "Dr. Dre: The Biography"): Dr. Dre was a young man from South Central Los Angeles. He was unsure what to do with his life right around the time he was going to graduate from high school. And he had an interest in, you know, performing, and he joined a number of well-known groups. And at each stage of his career he wound up introducing new elements, sounds, and techniques that influenced everything that followed.

CHIDEYA: What kinds of techniques did he introduced?

Mr. RO: Well, for one, Dre is very well known for introducing a higher level of quality to the actually sound of a recording. And also, musically, like in his first group, The World Class Wreckin' Cru, he sort of fused rap beats to R&B with the song by an artist named Michel'le called "Turn Out the Lights" which was, I believe, in the late '80s, immensely popular. And then he had his group N.W.A., and with them he sort of introduced like this Red Foxx, Richard Pryor form of comedy. And then he continued to evolve and to grow, and by 1992 he'd formed his own record company and had discovered another superstar named Snoop Doggy Dogg.

SNOOP DOGGY DOGG: (Rapping) With so much drama in the LBC it's kind of hard being Snoop D-O-GG, but I…

Mr. RO: And he played live music inspired by funk from the '60s and '70s on a single called "Ain't Nothing But a G Thang."

(Soundbite of song "Ain't Nothing But a G Thang")

SNOOP DOGGY DOGG: (Rapping) One, two, three and to the four, Snoop Doggy Dogg and Dr. Dre is at the door. Ready to make an entrance, so back on up.

CHIDEYA: And there's definitely a little bit of art meets life here, because Michel'le was not just on one of his records, was she?

Mr. RO: No, no, they actually - when they met, they eventually fell in love and they had a child together, a little boy named Marcel.

CHIDEYA: And then Michel'le went on to be with whom?

Mr. RO: Well, with Dre's former business partner at this label, Death Row Records, that they had co-founded in 1992. His name is Marion "Suge" Knight. And Dre had been with the label and ostensibly with Michel'le, I believe, from 1992 to 1996, when Dre and Marion Knight, Suge, parted, you know, under less than amicable terms. And today, you know, somehow, you know, Michel'le is married to Mr. Knight and has children with him.

CHIDEYA: Suge Knight is one of the most controversial figures in rap history, you know, people would at various times have speculated whether he was involved murders and commissioning nefarious deeds. It's certainly clear that he doesn't mind giving an impression that he is one tough guy. And what kind of commentary did Suge Knight have about Dr. Dre and how street he was?

Mr. RO: Well, in the beginning, they were very, very good friends. But once they had this parting of the ways in 1996, you know, Suge obviously was not very happy and he started sort of impugning, you know, everything from Dre's production abilities, which, you know, basically for the general interest audience means actually creating the records, to his manhood, his sexuality, you know. I mean, almost anything under the sun, Suge definitely had something, you know, unfavorable to say about Dr. Dre.

CHIDEYA: Did you feel that in the course of your research that you got a better understanding of - right now, for example, there's so much talk about, you know, what is hip-hop, is hip-hop making America a worse place for women, a worse place for kids, a worst place for everybody. Do you get the sense that Dr. Dre was what might have been seen as a stereotypical gangsta' rapper, or was he different in some ways, or a combination?

Mr. RO: Well, a little bit of both. I mean, there was a time when he did sort of traffic in gangsta' rap. But then, around 1996, that was a very pivotal year for him. I mean he decided he just didn't want anything to do with this music anymore. Not only for moral reasons, but it was also sort of tired, it was being so imitated.

So Dre - anyone that kind of knows the music knows that Dre is a symbol of positive change. And in the book I sort of tried to do what, you know, other riders haven't really, which is to kind of focus on specific lyrics and the themes that he was using on each song, and he sort of treats them like his music is an ongoing diary of sorts.

CHIDEYA: Do you think that he has gotten what he deserves in terms of props compared to someone like Puff Daddy, P. Diddy, whatever name he's using right now? He hasn't gotten - he hasn't been out front recently. He hasn't been someone who has become a mainstream pop culture figure like, you know, P. Diddy or Russell Simmons. Is he someone who wanted to be in that level of spotlight, or is there something in his personality where he doesn't seek it?

Mr. RO: I believe that his goals may have evolved. There was a point when he did want this image of, you know, being the Aftermath CEO, you know, but I think after a while, I guess, he just has more responsibilities and I think that, you know, he sees all that glitters isn't gold. And I think that, you know, based on everything that I research and everything and I've learned about him, I think he's just sort of deciding, you know what, I want to do other things. Because every time I spoke with them - I spoke to him a number of times over the years - he always had an intense interest in film. And I think that right now he's just sick of the image. You know, he's tired of it. He doesn't - he feels that the work could speak for itself,

CHIDEYA: Ronin Ro, thanks a lot.

Mr. RO: Thank you very much.

COX: That was NPR's Farai Chideya speaking with Ronin Ro about his new book "Dr. Dre: The Biography"

COX: Next on NEWS & NOTES: the first white student to graduate from an all-black Alabama high school, and Jeff Obafemi Carr takes us to the playground for this week's Snapshot.