Accessibility links
Elgar, Misunderstood Man of 'Hope and Glory' English composer Edward Elgar was born 150 years ago. His music, it was said, put the 'Great' back into Britain. Still for many, he remains an iconic figure for many Brits. 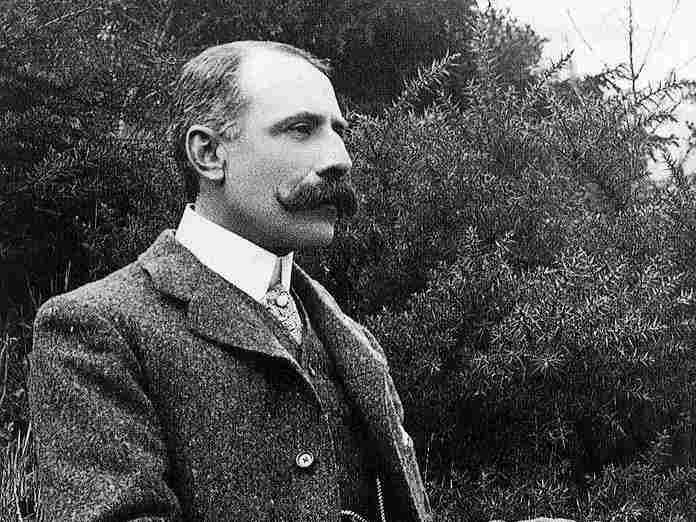 Elgar CDs You Must Hear

One of the most celebrated musical riddles is Elgar's Enigma Variations. It's a set of variations on a mysterious theme that never appears. On American Public Media's Performance Today, one listener thinks he's solved the puzzle.

The classical music world loves to celebrate big, round-numbered birthdays. Last year it was the 250th anniversary of Mozart's birth.

This year--June 2nd to be exact--there's another such birthday. Edward Elgar was born 150 years ago in the west of England. He's no Mozart. In fact, he doesn't even come close to a top-10 list of all-time great composers, and there won't be much hoopla over the anniversary in this country.

After all, over here, we know Elgar almost exclusively for writing a little marching tune that gets trotted out about this time of year when students graduate. It's from Elgar's "Pomp and Circumstance March No. 1." (audio)

But in England, Elgar still means something, though assessing his worth can be complicated. In some ways, Elgar embodies all that's good and bad about being British. The little ditty we use here to dish out diplomas means something very different to people across the pond.

When you add the words to the trio section of Elgar's "Pomp and Circumstance March No. 1," you get the song "Land of Hope and Glory," an unofficial British national anthem. In this country, it would be as if Aaron Copland had written "America the Beautiful."

Elgar's music is a source of pride for many Brits. He came along at a time when the country had endured a long dry spell between great composers. When Elgar was born, in 1857, Henry Purcell, considered the last significant English composer, had already been dead for 162 years. Some Brits say when Elgar arrived, he put the 'Great' back into Britain.

Even though his style was an amalgam of Germanic influences, somehow Elgar managed to write music that was British to the core. There's grace and elegance and some charm. His music pleased both audiences and most critics.

But some Elgar skeptics have seen the composer and his music as a soundtrack to the stuffy Edwardian era. Elgar himself, dressed in tweed with his big walrus mustache, looked like the very cartoon figure of Colonel Blimp, a satire of everything stereotypically British, from pompous patriotism to the strict class system.

Elgar's music, too, can be seen as too big and too puffed up. The "Violin Concerto" lasts nearly a full hour, and his two symphonies are each almost that bloated.

Although Elgar wrote the "Pomp and Circumstance" marches he was not a very pompous man and nothing at all like Colonel Blimp. He was the son of a piano tuner, who had no formal music education. He soaked up all he could by hanging around his father's music shop. Later he conducted a small ensemble at the "County Lunatic Asylum at Powick."

It's not hard to find the "pomp" in Elgar's music, but as musicians are quick to point out, there are plenty of darker tones mixed in. Cellist Julian Lloyd Webber says the "Cello Concerto" is "an intensely personal, lonely statement."

Anthony Payne, who reconstructed Elgar's unfinished Third Symphony, sees the composer's personality peak through in the Symphony No. 2. "One of the things that appeals to me is the melancholy mixed with rhythmic verve," Payne says. "A lot of people think Elgar is this confident, robust personality, but that's only on the surface. Underneath there's always this melancholy."

Elgar was a composer who, despite self doubt and meager means, worked hard to fulfill his dream. It's a dream many people can relate to, whether or not they're from the 'Land of Hope and Glory.'