Accessibility links
Six Day War: Shaping the Modern Middle East The Israeli victory launched a contentious, ongoing struggle over East Jerusalem and the Old City of Jerusalem — and marked the start of Israel's 40-year military occupation of the West Bank.

The first report in a five-part series. 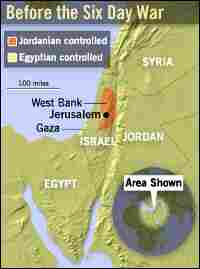 Click for a larger image of the area before the war.
Lindsay Mangum, NPR 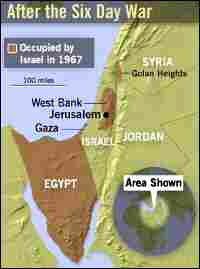 Click for a larger image of the area after the war.
Lindsay Mangum, NPR

View a timeline of events that took place between the Israelis and Egypt, Syria and Jordan during the Six Day War.

In the Six Day War of June 1967, Israel defeated the combined armies of Egypt, Syria and Jordan, capturing the West Bank, East Jerusalem, the Gaza Strip, the Golan Heights and the Sinai Peninsula. For Israel, it was a stunning triumph; for Arabs, a humiliating defeat.

Israel no longer occupies the Sinai or Gaza, but its continued hold over the other territories has stymied efforts to bring comprehensive peace to the Middle East.

The first part of a five-part series on the Six Day War follows.

In the spring of 1967, Israel grew increasingly alarmed by threats from Egyptian President Gamal Abdel Nasser.

The popular leader of the socialist Pan-Arab movement threatened to close the straits of Tiran, a vital passageway that would cut off Israel's southern water link to the outside world. Nasser used a bogus Soviet tip that Israel was about to invade Syria as a pre-text to kick out United Nations peacekeepers from Gaza and the Sinai Peninsula.

"He had never really liked this force and wanted to use the Soviet report as an excuse to evict UNEF, the U.N. emergency forces," said historian and author Michael Oren. Oren wrote Six Days of War: June 1967 and the Making of the Modern Middle East. "This he proceeds to do. He puts 100,000 of his men into Sinai, with several thousand battle tanks and war planes — and makes defensive pacts with Iraq and Syria — and declares intention to wage a war of destruction against Israel."

But on the morning of June 5, Israel struck first. The devastating pre-emptive attack destroyed most of the Soviet-supplied Egyptian air force before the MiG jets ever got off the ground. That night, a defiant Nasser called for jihad.

In the Sinai Peninsula, Israeli armor smashed through Nasser's defense lines with relative ease. The fight quickly became a rout. By nightfall of the second day, Egyptian forces were in full retreat and, with them, Nasser's wider Pan-Arab ambitions crumbled.

Nearly 10,000 Egyptian soldiers were killed in the first 48 hours of fighting.

"It was a shock, a nightmare. It was, somehow, the dream turned sour," said Ahmed Maher, a former Egyptian foreign minister. "The whole purpose of the Revolution was to build a strong country — politically, economically and militarily — and to put an end to the situation in which Israel was dominant. 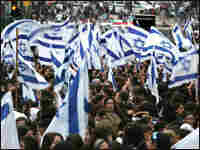 In the meantime, Syrian artillery units in the Golan Heights began shelling Rosh Pina and other towns in Israel's north.

While the offensive in Egypt was going far better than planned, Israel was reluctant to use ground forces against Syria and badly wanted to avoid a wider fight with Jordan, which then occupied the West Bank, Oren said.

"On that morning of June, the Israeli government sent a message to King Hussein of Jordan, saying, 'What's about to happen in the south is between us and the Egyptians. You stay out of it and we'll stay out of it. Don't do anything,'" Oren said.

Six days of war between Israel and its Arab neighbors in June 1967 re-shaped the modern Middle East.

The repercussions of the conflict continue to reverberate. To some, the Six Day War, or the June '67 War, as Arabs prefer to call it, never really ended.

To Israelis, victory brought reunification of Jerusalem, renewed access to holy sites, and greatly expanded the size of the fledgling Jewish state. For Palestinians and Arabs, including Egyptians, Syrians and Jordanians, it was a humiliating defeat that cost them the West Bank, Jerusalem, Gaza and the Golan Heights.

To coincide with the 40th anniversary of the war, NPR is taking a close look at its enduring legacy — the continued fight over East Jerusalem and the occupied West Bank.

Israeli soldiers were given careful orders not to shoot back if Jordanian forces opened fire. Under intense pressure from Arab states, King Hussein had placed his Army under the command of Egyptian generals. At 10:30 a.m. on June 5, those generals gave the order to open fire on Israeli-held West Jerusalem.

From Augusta Victoria Ridge near the Mount of Olives, Jordanian artillery units began raining 75 mm shells down on the city. Some 900 buildings were destroyed and 20 Israelis killed in a relentless barrage.

At the same time, Jordanian jets attacked the coastal cities of Hadera and Netanya, and Jordanian long-range guns just outside the West Bank city of Jenin began shelling the outskirts of Tel Aviv. Throughout this, the orders held firm: Israel did not return fire.

The "don't fire" orders collapsed, however, when Jordanian infantrymen swept up on to a strategic ridge on the north side of Jerusalem. Jordan gained a key advantage in targeting the city. Israel realized that Jordan was making far more than a symbolic nod at Pan-Arab solidarity.

As Jordan was about to lay siege to West Jerusalem, Israel called in reinforcements from the Sinai battle and sent its Jerusalem Brigade to re-take the ridge, which it did in a fierce fight that included hand-to-hand combat. 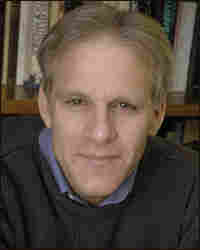 Michael Oren, author of "Six Days of War June 1967 and the Making of the Modern Middle East." Courtesy: The Shalem Center hide caption

"After very intense fighting — I can't stress this enough: The Jordanian armies fought with unprecedented valor — but after 24 hours, the Jordanian army was broken and ... was retreating throughout the West Bank, through Nablus, through Hebron, Bethlehem and across the Jordan River," Oren said.

"What you had here was a conquest without a strategic goal," said writer and historian Gershom Gorenberg. "The war was unexpected, the conquest was unexpected and the strategy had to be invented after the fact. And in many ways you could say that to this day, Israel is still trying to figure out what the strategic goal was of conquering the West Bank 40 years ago."

President Lyndon B. Johnson praised the cease-fire resolution on June 10, 1967, but was careful to avoid overt support for either side.

Former Egyptian President Gamal Abdel Nasser attempted to resign after the Six Day War. The address was broadcast live on Egyptian television and radio on June 9, 1967. Egyptians did not accept his resignation, and he continued to lead the country.

Eventually, a U.N.-brokered ceasefire took effect. In less than a week, Israel had more than tripled the size of the territory under its control.

After 40 years, including two Palestinian uprisings and waves of deadly suicide bombings, Israel's messy and tragic entanglement with the West Bank continues.

"It's tragic more than anything else," said Israeli peace activist Dror Etkes. "It's a story of waste of energy, of waste of life, of waste of so much potential on both sides — Palestinian and Israel. It's a story that cannot end well. Occupation cannot last."