Accessibility links
Lifestyles of the Recently Rich and Famous Author Robert Frank discusses his book, Richistan, in which he argues that a new class of wealthy individuals are spending differently than traditional blue-blood millionaires. He describes life in an insulated world of wealth he calls Richistan, where everything is bigger, and conspicuous consumption is the goal.

Listen
Lifestyles of the Recently Rich and Famous

Lifestyles of the Recently Rich and Famous 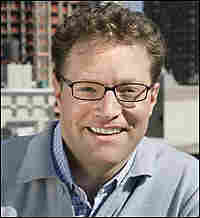 Robert Frank is the author of Richistan: A Journey Through the American Wealth Boom and the Lives of the New Rich. hide caption

Author Robert Frank discusses his book, Richistan, in which he argues that a new class of wealthy individuals are spending differently than traditional blue-blood millionaires. He describes life in an insulated world of wealth he calls "Richistan," where everything is bigger, and conspicuous consumption is the goal.

Robert Frank, author, Richistan: A Journey Through the American Wealth Boom and the Lives of the New Rich; writes the "Wealth Report" column for The Wall Street Journal

Excerpt: 'Richistan: A Journey Through the American Wealth Boom and the Lives of the New Rich' 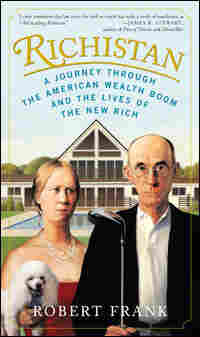 Dawn Carmichael stands at attention, holding two plates of almond-crusted sea bass with Moroccan salsa. The blond, ex-Starbucks barista is dressed in a blue suit and white shirt, with a crisply folded napkin draped over her left arm. She's lined up with three other servers in the cavernous kitchen of the Starkey Mansion, a prim, Georgian home in downtown Denver. When they get the signal — two taps on the kitchen door — the group will march into the dining room, greet their 12 dinner guests and begin their first public performance of the Ballet of Service.

The Ballet of Service is a complex routine where all the waiters must serve the plates to guest in perfect sync. It takes hours of practice. And it is one of the most demanding skills taught here at the Starkey Mansion — better known as Butler Boot Camp.

Ms. Carmichael visualizes the routine: Serve to the left, take two steps to the right, shift the second plate from right hand to left, and serve again. When "addressing" the table, she must lean in far enough for a smooth plate delivery, but not so close as to make the guests uncomfortable. After serving, she's supposed to take one step back, wait for eye contact with the other servers and exit the room counterclockwise.

Each step must look like a choreographed dance, building to a climax called the "crossover" — a plate-juggling pas de deux in which the butlers slide the second plate from their right to left hand with a quick body pivot, creating the illusion that the plate is suspended in midair while it's being transferred.

The Ballet of Service is designed to show off all the desired traits of a butler-to-be — discipline, agility, poise and intimacy with tableware. And it's one of toughest training exercises here at Butler Boot Camp.

Four times a year, aspiring butlers from around the country converge for Boot Camp training at Starkey, officially known as the Starkey International Institute for Household Management. Their aim: to become masters at the care and feeding of the rich. For eight weeks, the students hole up inside the mansion to cook, clean, polish, dust, wash and fold. They learn how to iron a set of French cuffs in seconds flat. They're taught how to clip a 1926 Pardona cigar, how to dust a de Kooning canvas and how to pair an oaky chardonnay with roasted free-range game hen.

They learn how long it takes to clean a 45,000-square- foot mansion (20 to 30 hours depending on the art and antiques), where to find 1,020-thread-count sheets (Kreiss.com) and how to order Ben & Jerry's Chunky Monkey ice cream at midnight if your employer is on a yacht in the Mediterranean (a British concierge service). They will be able to divide a 30,000-square-foot home into "zones" for cleaning and maintenance. They will design "stationery wardrobes" — envelopes and letterhead specially designed to reflect the owner's wealth and social standing. They will be taught that sable stoles should never be stored in a cedar closet (it dries them out), and that Bentleys should never, ever be run through the car wash.

Most of the students live in the mansion during Boot Camp, following the strict Starkey rules. Everyone has to wear a uniform of khakis, crisp white shirts, blue blazers and brown shoes. First names are banned; everyone is "Mr." or "Ms." to stress the importance of boundaries. The students are required to rise from their seats every time a visitor enters the room. If there's a coffee cup that needs filling, a spoon that needs polishing or a visitor who needs welcoming, the Starkey students must spring into action. The butlers-to-be are so wired for service that when a class break is announced, they all pounce from their seats to fill each other's water glasses.

By the end of the course, the aspiring butlers will be masters at pampering the privileged. The rich, they will learn, like their shampoo bottles and toothpaste tubes always filled to the top. If their employers have four homes, chances are they'll want their dresser drawers and bathroom cabinets arranged exactly the same in every house, so they don't have to go searching for their socks or pills. And they learn that the rich live in constant fear of germs.

"They're health freaks," says Raymond Champion, Starkey's chief instructor, standing at the whiteboard in Starkey's basement classroom. "These people are very successful and guess what, they want to live forever. These are very germ-oriented people. Get used to it. Germs are huge in this world."

No butler leaves Starkey without learning about the two other priorities for the wealthy — pets and collections. At Starkey these are known as "BYJ" categories, as in Bet Your Job.

During one class, Champion tells a story of a Southern family that had an entire mansion filled with birdcalls, which the butler had to dust and maintain every day. There was the guy with 500 cars that needed hand-washing and the rich heiress who had a barn full of cats and employed three full-time litter changers and a full-time bird feeder to pour seeds around the barn to attract birds to entertain the cats.

"The guy who fed the birds got paid more than any of us," he says.

Most of all, the Starkey students learn never to judge their employers, whom they call "principals." If a principal wants to feed her shih tzu braised beef tenderloin steaks every night, the butler should serve it up with a smile. If a principal is in Palm Beach and wants to send his jet to New York to pick up a Chateau LaTour from his South Hampton cellar, the butler makes it happen, no questions asked.

Starkey students pay more than $13,000 for Boot Camp. While that may sound steep, the payoff is even bigger. Butlering has become one of the fastest-growing jobs in the United States. With so many Richistanis needing so many butlers, demand and pay are soaring. A good Starkey graduate can start at $80,000 to $120,000 a year — not to mention free room and board at the mansion.

First, they have to get through the Ballet. Tonight, Dawn Carmichael and the butlers are nervous. It's their first Ballet and they haven't had much practice. Dawn gets her signal and leads the other three servers into the dining room. Under a crystal chandelier, the dinner guests are arrayed at the table with perfectly spaced sets of flatware, finger bowls and assorted glasses.

The first plates go down smoothly. But on the crossover, Dawn moves before the other three servers. She freezes, trying to get back in sync. The other three also freeze. The guests glance up at the four panicked butlers standing motionless with their plates of sea bass.

Finally, the butlers nod, serve the plates and quickly march out of the room.

"I lost the rhythm," Dawn says to the other butlers in the kitchen. "Oh man, was that bad."

James Hopkins, a fresh-faced college grad from Maine, is equally disappointed. "It felt awkward," he said. "We looked like robots."

The next morning, Raymond Champion takes the class to task. A former marine, whose specialties include martial arts, weapons training and decorative baking, Champion has little patience for sloppiness. He served as an enlisted aide to several generals and served in combat during the first Gulf War. With his six-foot-two frame, square jaw and impeccable manners, Champion makes for the perfect drill sergeant for Butler Boot Camp.

"I was disappointed," he tells the students the next morning, standing in front of his whiteboard. "Very disappointed."

Champion says that aside from the crossover, there were other foul-ups. He looks at John Leech, a flamboyant bed-and-breakfast owner from upstate New York. Leech was in charge of wine during the dinner and his job was to keep all the glasses exactly half full. Yet he allowed some glasses to drop to a quarter full before refilling. Champion also says Leech paid too much attention to the guests' conversation, rather than maintaining the detached attentiveness required of a butler.

"What can I say, I'm a very social person," Leech tells me later. "The guests were all telling interesting stories so it was hard not to listen. And I didn't keep the glasses full because I felt like I was being compulsive. But Champion was right."

The next night the class hosts another formal dinner. It goes perfectly. Dawn leads an expertly choreographed Ballet of Service. Leech keeps the wineglasses exactly half full. And he successfully ignores the guests' stories.

Champion greets them the next morning with a broad smile.

"Congratulations," he says. "Now that was service."