Accessibility links
Late, But Great, Banana Split Centenary Wilmington, Ohio, is celebrating 100 years of the banana split this week. Problem is, it might be three years too late, say folks in Latrobe, Penn., who claim to be the real home of the classic ice cream treat. 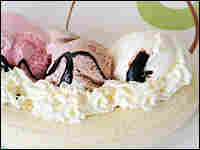 A debate rages over the origins of the banana split. But there's no argument about how perfect a summer treat they are. iStockphoto hide caption 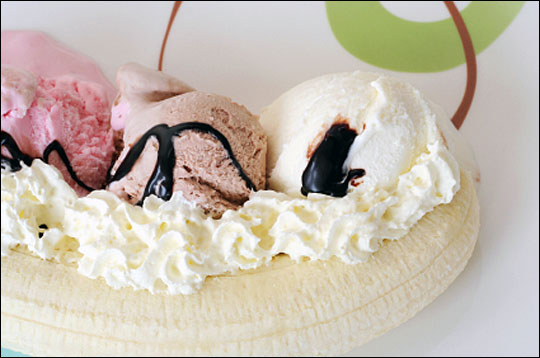 A debate rages over the origins of the banana split. But there's no argument about how perfect a summer treat they are.

Recipes for a classic banana split, and chocolate, strawberry and pineapple sauce.

Nancy Baggett is a cookbook author, food journalist and Americana researcher who often writes about the history and lore of desserts and sweets. Her most recent works are The All-American Cookie Book, a James Beard Foundation award nominee in 2001, and The All-American Dessert Book, which made The Washington Post and The New York Times lists of notable cookbooks in 2005. She can be reached through her web site, kitchenlane.com.

This week, fans are celebrating the birth of that enduring symbol of America's bygone soda-fountain era, the banana split. On June 8 and 9, Wilmington, Ohio, is holding its 13th annual Banana Split Festival, this year marking the 100th anniversary of the banana split's invention by one of its citizens, E.R. Hazard.

Problem is, Wilmington may have missed the banana boat by three years. Most sundae experts (yes, there are some) think that the banana split was created in 1904, about 275 miles away, by David Strickler, a pharmacy clerk in Latrobe, Penn.

Despite the evidence jeopardizing Wilmington's claim to fame, its centenary bash is still on. After all, the story of how local restaurateur Hazard made culinary history in 1907 by flanking three scoops of ice cream with a banana cut lengthwise is a key source of community pride. For decades, folks have heard how Hazard devised the treat to attract more students from nearby Wilmington College. People have grown up guffawing over how Hazard's cousin, Clinton, predicted the name "banana split" would not catch on.

Facts that seem to pull the peel out from under Wilmington's legacy are simply shrugged off.

"We think the controversy is fun," says Mary Gibson, owner of Gibson's Goodies, the shop that provides the ice cream for the festival. "Until pretty recently, we'd never heard of the Latrobe, Pennsylvania, claim. I guess news didn't used to travel as fast."

Advertising for the upcoming celebration notes that the Latrobe complication "won't dampen spirits" and that "thousands will still flock to Wilmington to sample an old-fashioned banana split."

So what does Latrobe have to say about upsetting Wilmington's banana cart?

"We've got clear evidence that William Strickler invented the banana split right here in the Tassell Pharmacy at 805 Ligonier St. when he was a 23-year-old clerk," says Joseph "Ice Cream Joe" Greubel, president of the Valley Dairy restaurant chain.

The 69-year-old Greubel says he personally talked with "Doc" Strickler about his creation, which "originally cost 10 cents, twice the price of regular sundaes." Ice Cream Joe also says that even the National Ice Cream Retailers Association has declared Latrobe the home of the banana split.

One key bit of "proof" that Greubel and others in Latrobe like to mention is an old receipt showing that Strickler commissioned a special boat-shaped dish from a nearby glass factory in 1905. (A dozen were said to cost $1.50.) Unfortunately, when I tried to verify the existence of that receipt, nobody seemed to have it, or any of the original glassware.

Greubel says he is just fine with the "good folks" of Wilmington celebrating the nation's most famous sundae, even if the 100th birthday was three years ago — an occasion that was marked by a centennial celebration in 2004 at the University of Pittsburgh, where Strickler earned his pharmacy degree in 1906.

Dubbed "From Pitt Came the Split," the event featured Greubel, also a Pitt alum, decked out in a Gay Nineties straw hat and bowtie, presenting the chancellor with a large, plush banana. The school then dished up banana split-flavored ice cream.

Latrobe also celebrated by hosting a dinner for ice cream notables, including Bryce Thomson, longtime editor of The Sundae School Newsletter, and by featuring a "Banana Split Brigade" in its 2004 Fourth of July parade.

Though Wilmington and Latrobe are split on the split's origin, Greubel and Gibson do agree on the classic formula: scoops of vanilla, chocolate and strawberry ice cream; pineapple, strawberry and chocolate sauces; a whole banana, halved; and whipped cream, cherries and nut garnishes. Gibson adds that Wilmington festival-goers are given an extra, nontraditional topper — caramel sauce — and can build their own sundaes to taste. The two insist that the banana must be cut "stem to stern": Cut it crosswise and you've got a banana royale.

One expert with a broader perspective on the battling banana split burgs is Ed Marks, a former ice cream retailer and soda fountain history buff who, in 1982, founded the Ice Screamers, a memorabilia collecting club, and who recently wrote Ice Cream Collectibles. He writes that it is fairly common for towns to brag that they were first with various concoctions, but, due to the scant documentation and poor communications in earlier periods, coming up with proof is difficult.

"Often, claims just fizzle out," Marks says. "A number of different places have said they originated the banana split, but those who generate the most interest — like Latrobe and Wilmington — tend to get the credit." Still, he thinks local promotions are always a positive because they "help keep the culture alive."

Why the banana split became top banana in a soda fountain era that spanned more than 100 years (the 1840s to 1950s) and that spawned literally thousands of goodies is open to speculation.

"Maybe it's the variety of flavors — there's something in there for everybody," says Joe Greubel, the Latrobe ice cream retailer. The colorful look may also be a factor, he adds.

Marks thinks that the secret lies in the banana getting the top billing. "Lots of people just love bananas," he says.

Whatever the reason, 100 or 103 years later, depending on whose story you buy, the banana split still strikes the public fancy, turning up at ice cream socials, community festivals, sweet shops and, occasionally, in home kitchens, including mine. Now where is my spoon?

Read last week's Kitchen Window: mastering a meal for one. 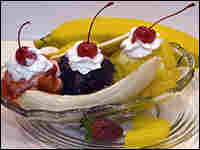 During the heyday of American soda fountains, dozens of banana split recipes were in circulation, but this is the one usually served in sweet shops today. Of course, it is fine to drop or add ingredients to suit your own taste. The only required item is the banana cut lengthwise; cut it crosswise and experts say you've readied a banana royale. Traditional boat-shaped dishes (inexpensive reproductions are often stocked with summer glassware) show off the banana split best, but have absolutely no effect on either the taste appeal or the fun.

All three of my sauce recipes can be prepared in advance, so throwing a banana split party is convenient and hassle free.

For each banana split:

3 to 4 tablespoons each, pineapple, chocolate and strawberry sundae sauces

This sauce is colorful and wonderfully fragrant. For very sweet strawberries, use the minimum amount of sugar; for very tart ones, add a little more.

2 to 3 tablespoons granulated sugar, or to taste

In a heavy, medium nonreactive saucepan, whisk together the sugar and cornstarch until well blended. Whisk in the jam-water mixture until smooth. Place the pan over medium-high heat, and bring to a gentle boil, stirring. Continuing to whisk, cook until the mixture just thickens and clears, about 2 minutes. Stir in the strawberries and cook 30 seconds longer. Taste and add more sugar, if desired. Cool, then refrigerate in a nonreactive airtight storage container at least 1 1/2 hours, and up to 5 days. Stir briefly before using.

I wanted a chocolate sauce with an appetizing sheen, dark color and full-bodied flavor. After several tries, I came up with this. It stores beautifully in the refrigerator for up to three weeks. Since a lot of its "chocolatiness" comes from the cocoa powder, be sure to choose a quality brand with a taste you like. Though the directions call for a food processor, the sauce can also be made without one; see the alternate instructions at the bottom of the recipe. In either case, follow the mixing instructions carefully to avoid scorching the cocoa and to ensure the smooth, glossy consistency of the sauce.

In a food processor, chop the chocolate until very fine. Thoroughly stir together the cocoa and sugar in a heavy, medium-sized saucepan. Stir in the water until the mixture is smooth. Place over medium heat, and bring to a boil, stirring. Gently boil, stirring and scraping the pan bottom, for 30 seconds and immediately remove the pan from the heat. Pour the hot cocoa mixture over the chocolate in the food processor, then let the mixture stand undisturbed for 5 minutes (so the chocolate can partially melt).

Process until the mixture is completely smooth (about 1 minute), stopping and scraping down the sides as needed. With the motor running, in a thin stream, add the corn syrup and then vanilla, until fully incorporated and the mixture is smooth; stop and scrape down the sides as needed. The sauce will seem thin, but will thicken considerably when chilled.

Let cool slightly, then transfer to a storage container. Refrigerate for up to three weeks. If necessary, thin the sauce by stirring in a little hot tap water.

Alternative Mixing Instructions: Chop the chocolate into chocolate mini-morsel-sized pieces; place in a medium bowl. Stir the cocoa through a fine sieve into a heavy medium-sized saucepan. Add the sugar and water and cook exactly as directed above. Pour a generous half of the hot cocoa mixture over the chocolate (no need to measure); let stand undisturbed for 5 minutes so the chocolate can partially melt. Whisk the mixture until completely smooth and thickened. Slowly whisk the remainder of the cocoa mixture into the chocolate until completely incorporated and smooth. In a thin stream, whisk in the corn syrup, then add the vanilla.

Fresh pineapple sauce makes a wonderful topper for vanilla ice cream, and if you buy a cored, ready-to-use pineapple or chunks, the recipe can be put together quickly. (If fresh pineapple is unavailable, canned juice-packed tidbits will do fine.) Another secret to the intense fruit flavor is incorporating some undiluted frozen pineapple juice concentrate.

5 tablespoons sugar, or more to taste

Whisk together the cornstarch and 3 tablespoons sugar in a medium, nonreactive saucepan. Slowly whisk in the pineapple juice concentrate, then the orange juice, until the mixture is free of lumps. Place the pan over medium heat and bring to a simmer, whisking. Adjust the heat so the mixture boils gently and cook, whisking constantly, just until the liquid thickens slightly and turns clear. Stir in the chopped pineapple (or tidbits). Continue cooking, stirring, until the mixture returns to a boil. Gently boil, stirring, for 1 1/2 minutes.

Remove from the heat. Taste and thoroughly stir in up to 2 more tablespoons granulated sugar until dissolved. Refrigerate the sauce in a nonreactive storage container until chilled, at least 1 hour, before serving. The sauce keeps, refrigerated, for up to 5 days. Stir before using.