Dispatches From Bush's Trip to Europe and G-8

Dispatches From Bush's Trip to Europe and G-8 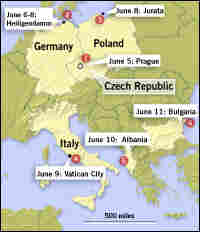 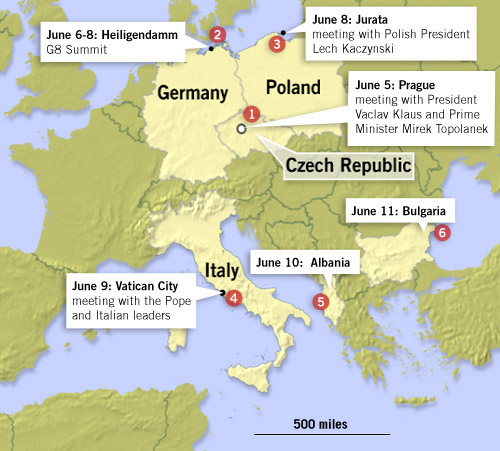 President Bush plans stops at several nations while on his trip through Europe.

The agreement, coming into effect in 2008 and being discussed at the G-8, is an ambitious effort to reduce the manmade emissions responsible for climate warming. But its impact has been less than many hoped, in part due to the absence of the United States from the pact. Here, we outline the stumbling blocks Kyoto has faced, as well as its successes.

Sometimes the best picture at a Presidential news conference isn't of the president.

The scene was the very impressive Archeological Museum in Sofia, Bulgaria, this morning.

This is the final day Mr. Bush's European tour, and I noticed this Bulgarian cameraman on the balcony in the back of the hall.

The museum was full of stunning pieces, including the fresco in this photo, tracing this country's ancient history.

The visit by the President of the United States is a huge day in Bulgarian history. 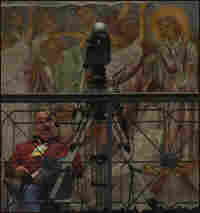 Not so enthused cameraman.

But the man on the TV camera in the balcony seemed unmoved — by the history from the past, or by that being made right before his eyes.

President Bush woke up in Heiligendamm, Germany, Friday a bit under the weather.

Mr. Bush was scheduled to meet with France's newly minted president, Nicolas Sarkozy, first thing Friday morning at the summit. The U.S. press pool was in a holding room when it became clear that something unusual was going on.

Typically after such a meeting between two leaders, the media are brought into the room. There are pictures, brief statements about how well it all went from the participants, who maybe (but not always) take a question or two.This time, the meeting ended with Sarkozy coming out alone and talking briefly to the French press only.

Was something amiss in U.S.-Franco relations?

It turns out the president was battling some kind of stomach ailment and wasn't up for posing for pictures and smiling at reporters. White House adviser Dan Bartlett met with reporters and explained that the illness didn't seem serious. It was either a flu bug, or perhaps something the president ate, he said.

Ahhh, but this is an international summit hosted by a close ally of the U.S., and even a statement as innocuous as Bartlett's can cause trouble. Was he suggesting that the food served by summit host and German Chancellor Angela Merkel was tainted? Had the president eaten a bad mussel, or a piece of problematic meat?

Hours passed, and the president rested for the remainder of the morning before resuming his schedule.

But in the noon hour, when Bartlett talked to reporters again, he'd gotten his story straight. There'd be no international incident here.

"The suspicion is that it was some sort of bug," Bartlett said, "probably more viral in nature, and highly unlikely to be anything related to food or anything he ate. [We] just think it's something that may be running through the system." Bartlett went on to say that the president probably picked it up from Mrs. Bush, who didn't feel very well herself a couple of days ago.

So that's the story on the final day out of the G-8 Summit in Heiligendamm: The president got sick. And no, he's not blaming the food.

A footnote: At one point, Bartlett noted the Mr. Bush didn't want to follow in his father's footsteps. He was referring to an incident in 1992, when President George H.W. Bush got sick at a state dinner in Japan.In the middle of the meal, the elder Bush fainted, slumped over and vomited into the lap of the Japanese prime minister, who was seated next to him.

If you've got the stomach for it check out the video on YouTube.

The Land of Ideas — and Knut

As a sideline push of its ideas on how to solve the problems of the world, G-8 host Germany set up a booth inside the confines of the International Media Center.

It's pushing Germany as the "Land of Ideas" – a campaign that started last year ahead of hosting the World Cup soccer championships.

They offer free drinks in the white tent and quite a good list of speakers. I heard a couple on regulating hedge funds and radically reshaping the global economic systems. Very tied to the summit agenda, other presenters talked up alternative energy and discussed issues concerning HIV/AIDS.

Also on offer in the Land of Ideas tent: a free stuffed animal. Not just ANY stuffed animal, but a small white polar bear named Knut.

The real Knut is pretty famous around Germany. He's a polar bear in the Berlin Zoo. Rejected by his mother at birth, he was hand raised by a zookeeper, who sang him songs and played the guitar, and, for a while, moved into Knut's pen.

Maybe you missed the international furor when a purported animal rights activist supposedly told the leading German tabloid that it is wrong for humans to interfere with animals in such a way and — the kicker — baby Knut should be killed.

This outraged Germans and only rocketed the Knut craze to greater heights. All of a sudden he – well, various renditions of him – were on sale everywhere around Berlin.

These free baby polar bear toys seemed to me a bit off G-8 topics, so I asked a staff member handing out drinks what the "idea" of Knut is. 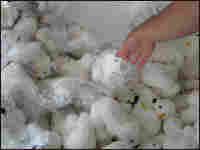 Knut toys were going fast at the G-8.

Robert Haasper was game to be helpful. "Knut is a current highlight of Berlin," he told me. "That extends to Germany. Everybody knows Knut and everybody wants to see Knut. So, it's the idea of a dear toy to take home in your hands and have to cuddle with."

But the latest news on the now six-month-old Knut is he's been biting his keeper. Not too hard yet, just "pin pricks," says Thomas Dörflein. But it's the first negative review the bear darling has ever had.

So is now the time to be pushing Knut as a co-promoter of Germany?

"I can't say something about it because it's not my idea. I just work here to give it to the people," he said. "They like it at the moment."

There was stone throwing, water cannons, and at least 160 arrests at the anti-globalization protests outside the G-8 on Wednesday.

But before they turned violent, these confrontations seemed like a dance, or a boxing match.

All roads that lead to the luxury Heiligendamm resort were closed. Still, by mid afternoon thousands of protestors had walked past unguarded metal barricades right up to a line of police.

Behind the officers, a tall fence closed off Heiligendamm, with razor wire on top or coiled on the ground just inside. The demonstrators' focus was keeping G-8 participants out – or getting inside themselves.

But in the afternoon sun, all was calm. Protesters did what they do at events like this. Some served couscous with white beans and carrots out of enormous metal pots using gigantic ladles. Some dismantled razor wire coiled alongside the road. Others slept, or tramped through green fields of grain looking for a way to break through the fence.

Some demonstrators were dressed as clowns, with red noses and curly purple wigs. Others – the "black block," as one protestor called them — wore dark sweatshirts, with hoods and face coverings ready.

All the police were decked out in full riot gear.

Today's dance along one of the main roads to Heiligendamm played out like this: A few protestors leave the road and walk along the edge of the fence. Police are spread thin, and move sideways with their backs to the fence to cover, as more protestors wander into the field. Some demonstrators step forward, just testing. Police tell them to move back and they do. Eventually, one officer makes the main crowd step away from the fence. Just inside, fully visible, canine unit police run their dogs through training exercises. 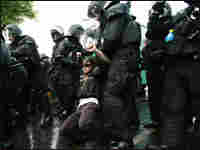 The sun starts to fade. The bulk of protestors begin to formally discuss, with the help of a bullhorn, whether to stay put for the night. More young people in black appear. A few dig a hole and prepare it for a fire. One practices throwing rocks into the field.

Then the police march. In several groups of about two dozen each, they come from behind the protestors, heading toward the fence too. The aim initially seems to be to surround and control. They stride along the road, then move to a bike path running parallel. In one big group now, the police stop, turn, and face the crowd, which yells and jeers. They stay put for a few minutes, then turn once more, and walk back the same way they came — but not very far. Then they step off the bike path, onto the grass by the field, and stand down. For now. 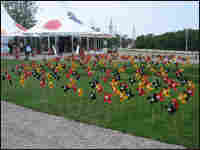 Anybody thinking about the dangers of alternative energy?

I was not, at about midnight Tuesday as I drove the dark country roads of the German state of Mecklenburg Vorpommern, trying to find the tiny town where I'm staying — and avoid any police or protester roadblocks that could send me back miles.

Suddenly, I felt surrounded by an unknown presence. The whole sky in front – and seemingly above me – was full of tiny red lights. There was no town to be seen, and not even much of a cell phone signal.

Martians crossed my mind. Completely distracted from driving, I peered into the darkness all around – and finally saw the arm of a windmill swooping around one of those glowing red dots. 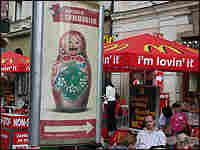 McDonald's has a foothold just outside the Old City. Things have changed around here.

A Press Conference Without Questions

Reporters who cover President Bush are always pushing for more access. It's not an easy task. This is a president who does not like news conferences, and has at times in his administration gone six months or longer without holding a long-form question-and-answer session with the White House Press Corps.

But even by the standards of the Bush White House, what happened in Prague this morning took things to a whole other level.

The scene was an ornate hall inside the 9th-century Prague Castle.

The three leaders would talk about their just-concluded meeting, which included discussions on a proposed U.S. missile defense shield, portions of which would be built just southwest of Prague.

There was plenty to ask about — especially on the topic of Russia and President Vladimir Putin, who this weekend warned that if the defense shield goes up, he'll have no choice but to respond by pointing Russian missiles at targets in Europe. He said there could be another Cold War.

Then, just before the president and his Czech hosts entered the room, an announcement came over the PA system.

"This press conference is going to be without questions."

Read that line one more time.

"THIS PRESS CONFERENCE IS GOING TO BE WITHOUT QUESTIONS."

The room erupted in laughter at the unintended humor of the statement.

Though, truth be told, the moment was mostly just seen as a somewhat more absurd version of what the Bush White House always tries to do anyway.

And, sure enough, the three leaders entered the hall.

Each made a statement.

At the end, as promised, they entertained no questions.

It all lasted 18 minutes.

President Klaus brought it to a close with a cordial, but abrupt, "Thank you, and have a nice day."