Accessibility links
Literary Great Chinua Achebe on Prose and Politics The acclaimed Nigerian writer recently won the prestigious Man Booker International Prize for his literary career. Achebe talks about the premise of his debut novel Things Fall Apart, why he stopped writing for nearly 20 years and how his experiences with Nigeria's fractured political past still shape the way he envisions Africa's future. 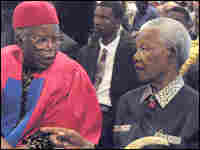 Distinguished Nigerian writer Chinua Achebe last week won the prestigious Man Booker International Prize for fiction. The award, which honors an author's body of work, is given only once every two years. Achebe, 76, edged out such well-known nominees as Margaret Atwood, Philip Roth and Salman Rushdie.

Achebe's win raises Africa's profile in the literary world and beyond.

Things Fall Apart, his debut novel published in 1958, won him global acclaim and is widely considered a masterpiece. The book has been translated into 50 languages and sold more than 10 million copies.

In a recent interview with Farai Chideya, Achebe shared his thoughts on the book's protagonist — Okonkwo — a prosperous farmer, husband and father in Nigeria during the early 1900s.

"The reason he thinks he's a strong man is that his father had been the opposite," Achebe said. "[He] had been a man of peace, a man of few words and he was not a success. He was not prosperous. And it is this fact — the fact of a man who didn't satisfy the expectations of his son — that is the crux of this story."

Achebe, now a professor at Bard College in upstate New York, did not write any novels between 1966 and 1988. Instead, he focused on the struggle for independence in Nigeria's Biafra region. Achebe points out that descriptions of him as the Biafran Minister of Information are incorrect.

"I was never a minister of anything anywhere," he said. "I was a supporter of the desire, in my section of Nigeria, to leave the federation because it was treated very badly with something that was called genocide in those days ... All this time I was just depressed ... It was in this situation that I became a spokesman of sorts. I did this because I was persuaded that the nation of Nigeria had doomed itself by its action."

Nigeria has spawned a series of world-renowned novelists, including the recent winner of Britain's highly regarded Orange Prize for Fiction — Chimamanda Ngozi Adichie for her novel, Half of a Yellow Sun.

But Achebe is the forerunner of them all, and his experiences with Nigeria's fractured political past still shape the way he envisions Africa's future.

"What a country needs to do is be fair to all its citizens — whether people are of a different ethnicity or gender," said Achebe. "This is something we need to practice."

Achebe offers a simple solution for the problems that plague parts of the continent:

"One concept: 'I am my brother's keeper,'" he said. "The leader is appointed to lead a people and he should see these as 'my people.' That's not happening yet. It's not happening in Nigeria, for example. I've had trouble now and again in Nigeria because I have spoken up about the mistreatment of factions in the country because of difference in religion. These are things we should put behind us."