Accessibility links
Brit Folk Legend Richard Thompson In Concert Richard Thompson has been making inspired music for forty years. A guitar virtuoso, early innovator of the British folk-rock movement, and one of the era's finest songwriters, his distinctive style as an artist has influenced two generations of musicians and poets. 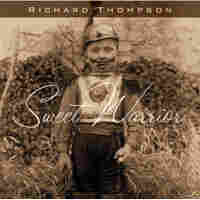 Download This Show: Subscribe to the All Songs Considered podcast and get a copy of this show.

Take Care the Road You Choose

She Sang Angels To Rest

Never Give It Up

Too Late to Come Fishing

Richard Thompson has been making inspired music for forty years. A guitar virtuoso, early innovator of the British folk-rock movement, and one of the era's finest songwriters, his distinctive style as an artist has influenced two generations of musicians and poets. Hear Thompson perform an evening of live music on NPR.org in a full concert, from Washington, D.C.'s 9:30 Club. This program originally webcast live on Jun. 22, 2007. 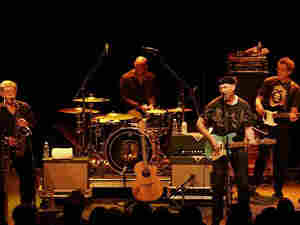 Richard Thompson's latest CD is Sweet Warrior. Though not intentionally political Thompson calls the album a meditation "on combat, both in love and war," with references to current events, including the war in Iraq.

The album's most provocative song, "Dad's Gonna Kill Me," draws on the language of soldiers who call Baghdad "Dad." "I'm interested in language," Thompson says, "and I was intrigued by the jargon used by the troops in Iraq. I was inspired to build a song using this language in order to express the present-day reality from the point of view of a soldier who's seeing it first-hand."

The reaction to the song, he says, has varied. "Some people have emailed me to say, 'How dare you?' Others have said, 'You've expressed our feelings perfectly,' including some parents of GIs who are over there." The initial reaction from the soldiers themselves has been gratifyingly positive."

Sweet Warrior is also Thompson's first electric album since 2003. "I tend to organize my writing in piles, and the electric pile was becoming especially big, so that's the one I chose to go to," he says.

Richard Thompson got his professional start in 1967 when he was just a teenager in the seminal British band Fairport Convention. In his four years with the group, they released a half a dozen albums that married electric rock with acoustic folk, changing the musical landscape in Britain just as the Byrds and The Band were doing overseas.

Thompson left Fairport Convention in 1971 and released his first solo album, Henry the Human Fly in 1972. Later that same year he married singer Linda Peters and the two embarked on a recording career as a duo. They released a half a dozen albums, including classics like 1974's I Want to See the Bright Lights Tonight, 1978's First Light and Shoot Out the Lights in 1982.

After touring to support Shoot Out the Lights, Richard and Linda Thompson divorced. Both continued as solo artists. 2007 saw the release of new albums from both Linda and Richard Thompson as well as one from their son, Teddy Thompson. Richard's Sweet Warrior is out on Shout! Factory Records. Linda's Versatile Heart is on Rounder Records and Teddy's Up Front and Down Low is on Verve Forecast.