Accessibility links
An Epic Performance by the Polyphonic Spree With two-dozen uniformed members, The Polyphonic Spree is more like a small army than a band. True to its image, the Dallas-based group makes high-energy, symphonic rock with the exuberance of a heavenly choir. Hear the band in concert.

An Epic Performance by the Polyphonic Spree

An Epic Performance by the Polyphonic Spree 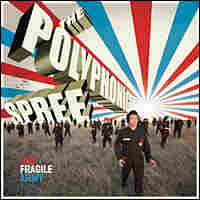 Extra: Hear the Polyphonic Spree in a previous performance from NPR station WXPN. 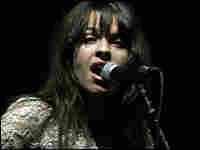 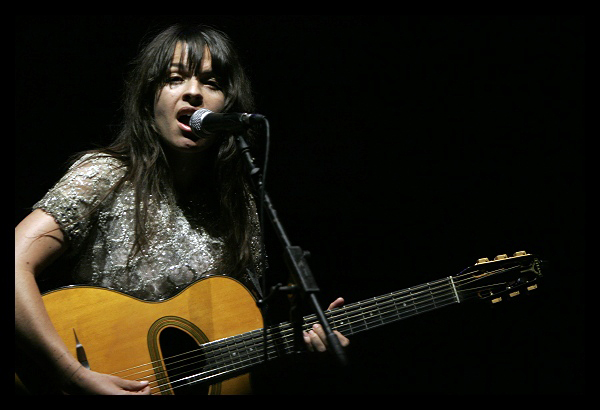 Extra: Hear the Polyphonic Spree in a previous performance from NPR station WXPN.

Hanging Around the Day (Part 2)

Get Up and Go

When the Fool Becomes the King

It's the Sun (reprise) 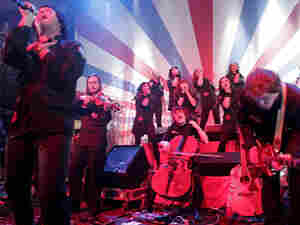 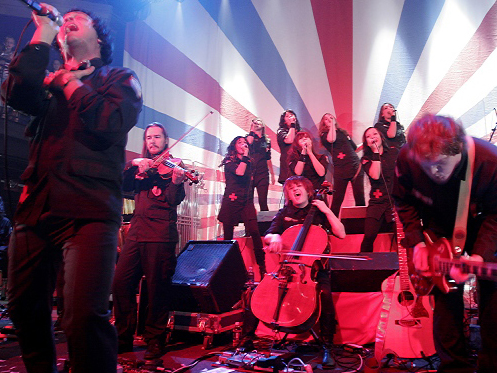 The Polyphonic Spree performing live at the 9:30 Club in Washington, D.C.

With two-dozen uniformed members, The Polyphonic Spree is more like a small army than a band. True to its image, the Dallas-based group makes grand, symphonic rock with the exuberance of a heavenly choir. The band brings its epic sound to Washington, D.C. for an evening of music, originally webcast live on NPR.org Jun. 30, 2007.

When The Polyphonic Spree first emerged in 2002 with its debut album, The Beginning Stages of..., the band seemed like some sort of strange, vaguely religious cult group. Its rotating cast, which included as many as 50 members, wore matching white robes and sang in unison with their arms raised as though they were reaching nirvana. Their music was unambiguously upbeat with Beatley harmonies and catchy, hymn-like melodies.

Despite critical praise, The Polyphonic Spree was slow to pick up an audience. In 2003, they were dropped by their label because of poor sales. Around the same time the band's music began appearing on TV in ads and programs like Scrubs and Las Vegas. The Polyphonic Spree later appeared on the soundtrack for the film Eternal Sunshine of the Spotless Mind and provided most of the score for the 2005 movie Thumbsucker.

For their latest CD, The Fragile Army, the Polyphonic Spree has traded the white robes for matching black uniforms. The military-inspired pants and jacket feature a heart, a red cross and gold pin with each member's name on it.

"We wanted to capture a whole lotta light and a whole lotta dark on the same page," says Julie Doyle, one of the group's principal songwriters. We really hit the nail on the head this time; this is the Spree at its finest."

Group leader Tim DeLaughter formed The Polyphonic Spree in 2000 following the breakup of his previous group, Tripping Daisy. That band's run as one of the '90s more popular alt pop groups ended abruptly when its guitarist, Wes Berggren died of a drug overdose in 1999. DeLaughter formed the Polyphonic Spree partly as a reaction to Berggren's death, in his search for light in the darkness. DeLaughter was also inspired by '60s vocal groups like the Fifth Dimension and later by the soaring sound of the Electric Light Orchestra.

DeLaughter and Doyle wrote the songs for The Fragile Army at their Dallas home. They then took the songs to the studio where the two dozen band members took over. "It was weird, because it seemed like they had heard the songs before," Doyle says. "It came so easy to them, but then again that's part of the magic of The Polyphonic Spree... intuition."

Jesca Hoop's music is cinematic. Like the soundtrack to a strange, imaginary world, Hoop's songs are a lyrical blend of old world sounds, offbeat rhythms and distant guitars, setting a scene that's at once playful and dark.

Artist Tom Waits, a fan of Jesca Hoop's songwriting, says her "music is like a four-sided coin. She is an old soul, like a black pearl, a good witch, or a red moon. Her music is like going swimming in a lake at night."

After hearing Hoop's music, Waits sent her demo CD to his publisher, who then passed it on to DJ Nic Harcourt, host of NPR member station KCRW's Morning Becomes Eclectic. Harcourt started playing the song "Seeds of Wonder" during his show. It became the most requested song for eight consecutive weeks.

The live concert webcast is a production of NPR Music's All Songs Considered, with host Bob Boilen, and the 9:30 Club in Washington, D.C.

Album
The Beginning Stages Of...
Artist
The Polyphonic Spree