Accessibility links
Sara Tavares Mixes Portuguese, African Rhythms Tavares' travels from Portugal to her parents' homeland in Cape Verde put her in touch with her cultural roots. The journeys also brought a unique mix of sounds to the singer/songwriter's music. 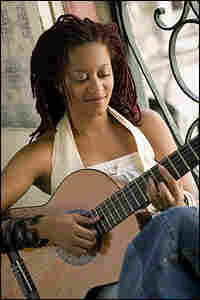 When she was younger, Sara Tavares sang along to the music of Whitney Houston and Stevie Wonder. Courtesy Times Square hide caption 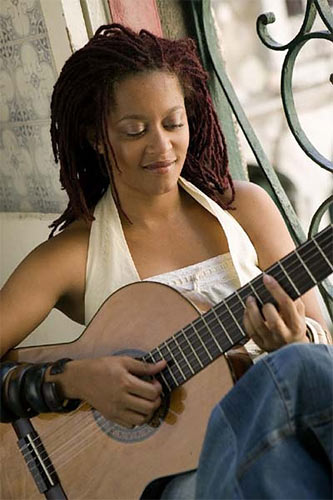 When she was younger, Sara Tavares sang along to the music of Whitney Houston and Stevie Wonder.

In August 2006, Sara Tavares appeared on News & Notes. Hear her live performance of selections from Balance.

Sara Tavares was 4 when her father left the family to return to Cape Verde, a cluster of islands west of the African mainland. Her mother moved away to start over in the south of Portugal. Sara was left in Lisbon to be raised by a woman who was 76.

Young Sara amused herself by singing along to Whitney Houston, using a stick of deodorant for a microphone. At 15, she won a television contest like American Idol. Suddenly, she was singing with Portugal's best-known performers.

Something was missing though ... until she rediscovered her parents' roots in Cape Verde, and embraced Lisbon's Creole mix of language, culture and rhythm.

"When I was singing other people's repertoire, I would feel the distance between me and that repertoire, and I would ask myself, 'Why do you feel distant?'"

Her frequent travels to Cape Verde helped solidify the connection to her roots.

"Getting in touch with this culture and speaking the language and knowing the history of my parents, it all fills a gap that I had in me, and I wanted to express that," Tavares says.

"All my friends are either from Angola or from Mozambique or Guinea or Cape Verde.... So I started to focus on this mixed reality in Portugal and how all these African communities in Portugal have influenced the Portuguese language and culture. "

Tavares mostly sings in Portuguese slang, she says, "and I mix some of the crioulo and some African expressions."

"I compose like I'm praying," she says. "I just sit with the guitar and I kind of get into my composition trance and I talk to the spirit and let it flow through me."