Accessibility links
A Late Lift for Country Legend Louvin Country singer Charlie Louvin was one half of the Louvin Brothers, popular in the 1950s. Now 80, Louvin is experiencing a late career revival. He's adored by younger audiences, and sings with the likes of Elvis Costello, Jeff Tweedy on his new CD. 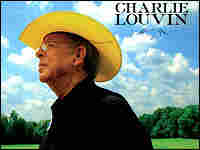 Louvin: Then and Now

Compare songs from Louvin's new CD with their older renditions.

Blues Stay Away from Me

Blues Stay Away from Me 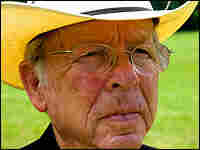 The Louvin Brothers were one of the hottest acts in country music in the late 1950s, and their songs remain vital and relevant today. Their breakup in 1963 was followed by Ira Louvin's death in a car accident not long after. And younger brother Charlie, who turns 80 this weekend, spent years out of the spotlight.

But Charlie Louvin's career has been revived by working with younger musicians and producers. He tours with major rock and Americana artists. A new album features reworkings of classic Louvin Brothers material, as well as a poignant tribute to his late brother.

Louvins recent wave of success and attention came to him more or less out of the blue, through an instant message from singer John McCrae, front man for the band Cake. McCrae told Louvin that the band was planning a 23-day tour and asked him if hed like to do two or three of the gigs with them. Louvin says he didnt need much time to make up his mind.

Im sure he hadnt got up from his stool in front of his computer till he got his answer," Louvin says. Cause as quick as it came in, I answered it and said not only would I like to be on two or three of them, Id like to be on the whole 23 days. And thats how it started.

By the time the tour was over, Louvin was singing duets with band members and feeling adored by a new generation. But this was not entirely a new situation. The Louvin brothers were reintroduced to record buyers in the late 1960s and early 70s when country rocker Gram Parsons brought their songs — such as "The Christian Life" — to collaborators Emmylou Harris and The Byrds.

Louvin's current disciple-in-chief is 40-year-old Josh Rosenthal, who signed Charlie to his Tompkins Square label in New York. Rosenthal says that in Louvin he saw an artist with a past, present and future.

Sometimes I have to stop myself," Rosenthal says. "Because this is somebody who Johnny Cash met when he was 13 years old. And Charlie rubbed shoulders with Hank Williams at MGM studio. So that's the kind of person we're dealing with. There's not that many people left who have seen what he has seen and experienced what he has experienced.

As the apocalyptic imagery suggests, the Louvin Brothers often infused secular country songs with their gospel roots. As Charlie says today, there's an awful lot of morality in Louvin Brothers songs. Paradox, too.

Ira Louvin, the duo's chief songwriter, was a combustible alcoholic. Charlie says he dwells on the redeeming side of their relationship in his tribute song, "Ira."

"I was called to play the mandolin on some songs," Marty Stuart says. "Basically what that means is I'm standing at Ira Louvin's spot at the microphone."

Another guest on the CD is country singer and preservationist Marty Stuart. He says Louvin is the latest in a string of country legends, like Loretta Lynn and Porter Wagoner, who have found late career success working with younger producers and playing to younger audiences.

"It's beautiful when somebody comes along and tells a Charlie or a Porter or a Loretta that it's OK to be you again," Stuart says. "All they need is a round of applause and a reason to go to a spotlight and they come back to life. I've watched Charlie come back to life again.

Louvin should be quite lively in the coming weeks. His birthday plans, he says, include an appearance on the Grand Ole Opry and the famous Ernest Tubb Midnite Jamboree.

I enjoy what I do, Louvin says, and I think if you enjoy what you do, its not work. I plan to continue as long as the boss man gives me the breath to stay on key. If I cant sing on key, then its time to go.