Accessibility links
Prince Releases 'Planet Earth' CD Prince caused a stir in the U.K. recently when he gave away nearly 3 million copies of his new album, Planet Earth, with a British newspaper. The album is now being released in the U.S.

Prince caused a stir in the U.K. recently when he gave away nearly 3 million copies of his new album, Planet Earth, with a British newspaper. The album is now being released in the U.S. 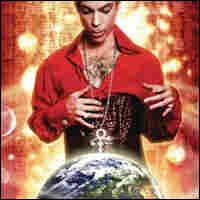 The new CD by the artist once again known as Prince hits U.S. stores today. Last week, Prince caused a stir in the U.K. by giving away nearly three million copies of the album inside a British newspaper. It was great news for fans, but as NPR's Elizabeth Blair reports, his label wasn't very happy.

ELIZABETH BLAIR: From the beginning, Prince has been a maverick and something of an eccentric. Owen Husney, Prince's first manager, met him in the late 1970s in Minneapolis.

OWEN HUSNEY: He was running around in like practically pantyhose, and people didn't know he was so androgynous. What is he? Who is he? Is he male? Is he female? Oh, he's crazy. What is he?

BLAIR: Prince has also been controversial, and not just for some of his lyrics. In the late 1970s, Prince signed with Warner Brothers and made the label a lot of money.

PRINCE: (Singing) If you don't like the world you're living in, take around - at least you got friends.

BLAIR: Prince made his anger public by inscribing the word slave into his beard. Jason King teaches about the record industry at New York University.

JASON KING: It highlighted to audiences that recording artists, as glamorous as that life may seem, really have very disadvantageous contracts with record labels. The flip side of that is that he really wasn't a slave in the sense that record companies really did a lot for him in terms of marketing him, promoting him, pushing him.

BLAIR: Prince didn't make it easy for them. With few exceptions, he refused to do interviews. Bob Merlis was director of publicity at Warner Brothers when Prince was signed to the label. And he says he tried several times to convince Prince to talk to the press.

BOB MERLIS: He did say something about I could have a conversation about music with Miles Davis, you know, and cited some musical terms, like, you know, diminished fifths, arpeggio, whatever. He said, but I don't really speak the language that these journalists speak.

BLAIR: Besides, creating a mystique around himself is just as effective a marketing tool as baring your soul in the press. Prince didn't say much about his decision to give away his new album inside a British newspaper, either. Anyone who bought the Mail on Sunday on July 15th got a free copy of "Planet Earth."

PRINCE: (Singing) Just like the (unintelligible) around the sun, planet earth is now committed its balance with the one.

TOM MOON: He has the chance to claim listeners right away. He doesn't have to mess with an antiquated system of getting the record from him to the ultimate end user. Why not get people familiar with the music quickly, get it out there, create a little bit of a stir?