Accessibility links
Live Music from the Film 'Once' Playing under the name The Swell Season, hear Irish singer Glen Hansard and Czech newcomer Marketa Irglova perform songs from the hit musical Once recorded live in concert from Washington, D.C.

Listen
Live Music from the Film 'Once'

Live Music from the Film 'Once' 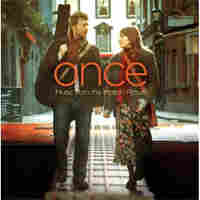 The soundtrack to the movie Once was written and performed by the film's stars, Glen Hansard and Markéta Irglová. hide caption 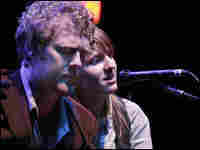 When Your Mind's Made Up

All the Way Down

If You Want Me

Say It To Me Now

Into the Mystic (Van Morrison cover) 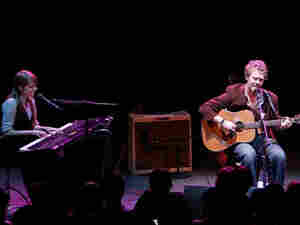 Hansard is frontman for the Irish rock band The Frames, while the Czech-born Irglova is a classically trained singer, and their music serves as the centerpiece of the surprise hit film Once. The movie, which also stars Hansard and Irglova, tells a guy-meets-girl love story largely through song.

Before making the film, Hansard and Irglova recorded a collection of songs together titled The Swell Season. Versions of the songs wound up in the movie, and in several cases also appear on The Frames' recent CD, The Cost.

Hansard had a small part in the 1991 film The Committments, but Irglova is a first-time actor. Hansard has spent the past 15 years writing and recording with The Frames, while Irglova was just 17 when she made Once. Born in 1988 in Moravia, Czech Republic, she began playing the piano and guitar as a child and studied classical music.

Once was written and directed by John Carney, a former bassist for The Frames. The movie won the World Cinema Audience Award at the 2007 Sundance Film Festival and has since garnered widespread critical acclaim and box-office success.