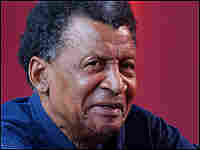 Independent producer David Schulman talks to Abdullah Ibrahim in 2002 during a rehearsal in a New York apartment.

Water from an Ancient Well

Unlike many American players, though, Ibrahim spent many years living in exile from his home country.

Born in 1934 as Adolph Johannes Brand, Ibrahim grew up under apartheid in Cape Town, South Africa. He loved the jazz he heard on the radio, and sometimes bought jazz records from black American GIs. As a young man, he played in groups with names like the Tuxedo Slickers. But public mixing of the races was illegal, and jazz players in integrated bands risked arrest playing in underground clubs run by gangsters.

Ibrahim became a political exile in 1976, after he announced his membership in Nelson Mandela's African National Congress. But soon before he left South Africa, Ibrahim and his band went into the studio in Cape Town. They recorded a tune called "Mannenberg." Named for a segregated township on the fringe of Cape Town, that piece became an anthem of the anti-Apartheid movement. Years later, Ibrahim performed when Mandela was sworn in as president in 1994.

During his years of exile in New York, Ibrahim performed with many of the jazz musicians who inspired him — including luminaries such as Max Roach and Duke Ellington. It was Ellington who got him his first record deal in 1964. That was when he was still known as "Dollar" Brand. Seeking peace and ritual he hadn't found in church, he converted to Islam in 1968, and changed his name to Abdullah Ibrahim.

As Ibrahim's style evolved, his compositions grew more deeply rooted in the sounds of Africa. He has a deft touch at the piano, and also plays flute. Few living composers can match his melodic inventiveness. He has recorded dozens of CDs, and has composed the music for films including Chocolat and No Fear, No Die. He was featured in the 2002 Documentary Amandla! A Revolution in Four-Part Harmony.

Today, Ibrahim makes his home again in the hills outside of Cape Town. He writes music, teaches, and studies martial arts — as he has for 50 years. He is married to the noted jazz singer Sathima Bea Benjamin.