Accessibility links
Gabriela Montero: Improvising With The Band Pianist Gabriela Montero fields songs sung over the telephone and creates her own improvisations around them. This week, hard work on a sailing team inspired a listener to sing the song "The Weight" by The Band.

Gabriela Montero: Improvising With The Band

Gabriela Montero: Improvising With The Band 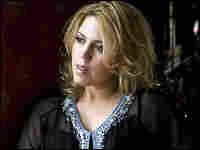 Produced by NPR and

Gabriela Montero is a fine classical pianist who is also a great improviser. She often ends her concerts by asking audience members to sing her a tune, so she can create a spontaneous composition around it. Along with Performance Today host Fred Child, Montero also fields songs sung over the telephone and creates her own improvisations. This week, the caller is Emily Bogrand, a student at Georgetown University. When she's not studying French and music, Emily works hard on her sailing team. The theme song for her crew is the popular tune from the late 1960s called "The Weight," by The Band. Emily's beautiful voice inspired Montero to drift comfortably into uncharted waters.