Accessibility links
Distinguished Crooner Nick Lowe, in Solo Concert A sharp-witted English singer-songwriter, Lowe has been making music for more than 30 years, first as a pub rocker and later as a new-wave innovator and country-rock singer. Now a distinguished crooner, Lowe performs a full concert from Alexandria, VA. 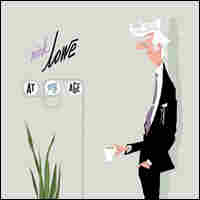 This live concert webcast is a production of NPR Music's All Songs Considered and the Birchmere in Alexandria, VA.

PC users right-click, mac users left-click and save the link to your computer:

What's Shakin' on the Hill

Has She Got A Friend

All Men Are Liars

I Trained Her to Love Me

Cruel to Be Kind

Hope For Us All

Rome Wasn't Built in a Day

I Knew the Bride (When She Use to Rock and Roll)

Heart of the City

The Beast in Me 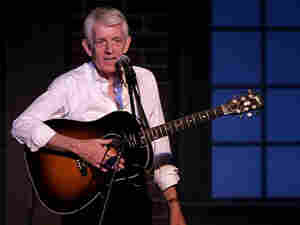 A brilliant, sharp-witted English singer-songwriter, Nick Lowe has been making music for more than 30 years, first as an early pub rocker and later as a new-wave innovator and rock singer. Now a distinguished crooner making country-flavored pop music, Lowe is widely loved for his eccentric, melodic songwriting and biting lyrical turns. Lowe performs in a full concert, originally webcast live on NPR.org from the Birchmere in Alexandria, Va.

Always smooth and charming, Lowe is touring in support of his new album, At My Age, a wry but intimate look at love and loss. Lowe dispenses his affectionate meditations on life in his late 50s with humor, grace and impeccable artistry. He calls the new CD "a bit like a Dean Martin country record."

Nick Lowe remains best known for writing the songs "Cruel to Be Kind," "(What's So Funny 'Bout) Peace, Love and Understanding" (recorded by Elvis Costello) and "The Beast in Me" (recorded by Johnny Cash).

Lowe got his start in the early '70s as the bassist and principal songwriter for the British roots-rock group Brinsley Schwarz, one of the primary catalysts for the English pub-rock scene and a back-to-basics movement that favored three-minute, hard-driving rock 'n' roll.

As the co-founder and house producer for Stiff Records, Lowe recorded Elvis Costello's early albums, along with works by The Damned, Graham Parker and The Pretenders. He released his first solo album in 1978, and has since made more than a dozen critically acclaimed albums. At My Age is his first new work in six years.

After recently becoming a first-time father, Lowe told Fresh Air's Terry Gross about the dramatic changes in his life: "I never thought I'd ever have children, and he suddenly turned up and it's absolutely delightful," Lowe says. "You know, I think he's great, but he is a blooming nuisance, there is no doubt about it. Somebody said, 'When the pram's in the hall, inspiration's out the window,' or something like that. And it's quite true. It's very, very difficult. I find that in order to write songs the way I did, I have to have an unlimited amount of time to just stare out of the window, to go and do whatever I needed to do. That is but a distant memory now."