Accessibility links
Dark and Delicate, Hoop Finds 'Havoc in Heaven' Hoop crafts an eclectic concoction of troubadour folk, summery California pop and Broadway balladry. At times, the music can be introspectively nuanced, at others powerful and cinematic. 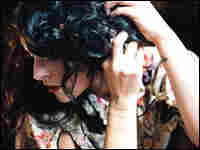 For a musician with limited exposure to popular music growing up, Jesca Hoop has a remarkably deep and mature sound. But in spite of a sheltered Mormon upbringing, the L.A.-based singer-songwriter doesn't come across as restrained. Branching out and looking elsewhere for inspiration, Hoop found tutelage from Tom Waits, initially when she worked as the nanny for his children.

Waits' proximity clearly had an effect on Kismet's sound. Hoop's debut seems to highlight their mutual appreciation for quirky rhythms and old-fashioned song forms, along with an aesthetic that conjures images of French cinema. There's joy in her music, as she draws on a lifetime of careful listening and pocketing away every genre she could find useful later on.

In "Havoc in Heaven," Hoop crafts an eclectic concoction of troubadour folk, summery California pop and Broadway balladry. At times, the music can be introspectively nuanced, at others powerful and cinematic, with bowed cellos and tympanis creating an ominous rumble underneath. The Baroque assortment of harpsichords, delicate chimes and clattering percussion gives "Havoc in Heaven" a faintly dark Gregorian drone: Even Hoop's voice exposes a chant-like inflection as she sings, "Don't believe your eyes when the maiden does arrive / You fool, she is the enemy." Even with so much going on, the song is infused with energy and clear direction — an excellent start for an exciting new artist.