Accessibility links
Joni Mitchell: A Resurgence of Music and Art After a long hiatus, the restless singer-song writer collaborates on a ballet, launches an art exhibit and releases a new album.

Listen
Joni Mitchell: A Resurgence of Music and Art 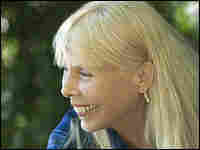 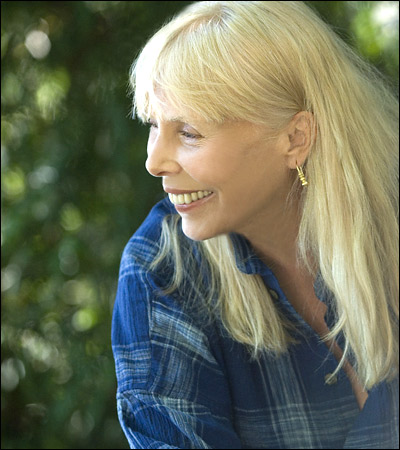 Mitchell has signed a two-record deal with the Starbucks 'Hear Music' label. 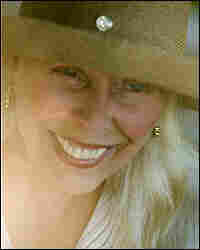 In May of 1995, Joni Mitchell visited NPR to perform her songs and talk with 'Weekend Edtion Sunday' host Liane Hansen. 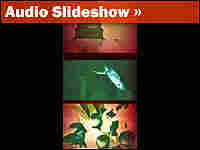 Singer-song writer Joni Mitchell was a major musical star in the 1970s and 80s, but she hasn't produced a recording of original work in nearly 10 years. Then, in a burst of activity over the past months, she's collaborated on a ballet, released a new album titled Shine and launched a new art exhibit.

At an art gallery in New York City's Little Italy, workers busily saw open crates and unwrap huge photos. Mitchell's artwork has arrived and everyone is scrambling to get the show hung on time. Mitchell oversees the placement and hanging of some 40 pieces.

A Painterly Approach to Music

Mitchell attended art school as a young woman and has had numerous gallery showings of her work. She paints the same way she creates music. She says both involve putting down layers until something fully formed emerges.

"You do your preliminary sketch; you build your skeleton," Mitchell says. "Then you start overdubbing an additional area. You put your first mark on your canvass. It's the same way you lay your first bed whatever it might be, a drum part or bass part. It's exactly the same process."

It may be a surprise, but Mitchell says that she writes her music first and then her lyrics.

"It's a harder puzzle," Mitchell admits. "It's like you do the score and then do the movie. But by the score you know where your climatic statements fall and where your descriptive passages can go. And you get a more unusual rhyme scheme."

A Tribute from Herbie Hancock

Shine is not the only new Joni Mitchell recording. Jazz keyboardist Herbie Hancock has just released a tribute CD, River: The Joni Letters (audio), which features guest vocalists such as Norah Jones, Leonard Cohen and Mitchell.

Hancock says he was inspired by Mitchell's brilliant words, imagery and metaphors.

"The foundation of her music is really her poetry," Hancock says. "If I want to do justice to her music, I have to begin with the words. Many of her lyrics are narrative and descriptive of the scene, not just intuitive. So it's treated almost like doing a movie score."

For her own album, Mitchell also found music and images inextricably linked.

"The songs," Mitchell says, "simultaneously came out of working with these images and watching so much war history."

The images in Mitchell's New York exhibition are, in part, a response to the U.S. wars in Iraq and Afghanistan. One triptych shows washed out images of the U.S. Capitol dome, the toppling of Saddam Hussein's statue in Baghdad, and a group of U.S. senators.

In one way, the show is a departure for Mitchell. While much of her previous visual art has been painting and drawing, the new works are modified photographs taken with disposable cameras. But in another way, the exhibit revisits recurring themes in Mitchell's art. She has always been known for her political and social concerns.

"Why don't they learn from history?" she asks. "Didn't they notice that Russia went broke in Afghanistan? You can't beat these people on their own turf. The whole thing is stupid. They're just not observant."

On the new album, Mitchell expresses those sentiments in the song "Strong and Wrong."(audio)

For nearly a decade, Mitchell resisted the urge to write songs expressing her political feelings. In fact, she says, she didn't write any music, nor even touch a piano or guitar.

"One of the things that made me quit was that I said I wasn't going to write any more social commentary," Mitchell says. "When I quit 10 years ago, I got stubborn with myself. I took a lot of flack. I didn't want to go through the experience.

But ultimately, she couldn't fight what was inside.

Mitchell wrote all of the lyrics on her new recording save one. It's called "If," her musical setting of a poem by Rudyard Kipling. (audio)

Kipling's poem portrays a father giving advice to his son. Mitchell uses most of the poem, but made some changes. She doesn't like Kipling's advice at the end.

And Joni Mitchell is back, wide awake, with new music and new art.

Joni Mitchell's new exhibit of photographs, 'Green Flag Song,' is on display through Oct. 6 at the Violet Ray Gallery in New York City.