Donizetti's 'The Daughter of the Regiment'

Donizetti's 'The Daughter of the Regiment'

In Act One, Marie leads Tonio and the soldiers in the morale-boosting, "Song of the Regiment."

In the second act aria Par le rang et par, Marie is despondent. The Marquise has given her wealth and status, but has deprived her of her one, true love. 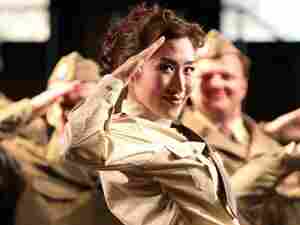 JiYoung Lee stars as a vivacious young woman who was raised by an entire company of the French army, in The Daughter of the Regiment. Karin Cooper hide caption

Creative storytellers often get crammed into cubbyholes. Certain movie directors, no matter how versatile, are automatically associated with gangster films, period dramas or high-tech thrillers. Authors with vastly different styles are lumped together as specialists in crime novels, suspense, romance or science fiction. Rightly or wrongly, it seems far easier to rattle off lists of specialists than to cite artists who are best known for creative variety.

Opera composers get the same treatment. Giacomo Puccini is famous for violent, verismo potboilers, despite his talent for touching romance (La Boheme) and biting satire (Gianni Schicchi). Richard Wagner is known for complex, symbolic dramas based on ancient myths and legends — the massive Ring cycle comes immediately to mind — though he also wrote more lighthearted fare. Even the great Giuseppe Verdi is most often associated with high drama and deadly intrigue, even though his works range from historical epics to family dramas, and even include a comedy or two.

In contrast, Gaetano Donizetti is a composer who seems to defy categorization. He wrote more than five dozen operas, and his works are nearly impossible to cubbyhole. He became a master of dark, historical dramas, with works like Anna Bolena and Maria Stuarda, and his Lucia di Lammermoor is among the finest examples of romantic tragedy.

Yet Donizetti also had a true genius for comedy, displayed in the brilliant farce Don Pasquale and the good-natured charmer The Elixir of Love. And then there's the opera featured here, La fille du regiment — The Daughter of the Regiment. It's a rollicking combination of esprit de corps, slapstick antics and innocent romance — not to mention intoxicating music highlighted by spectacular vocal writing.

World of Opera host Lisa Simeone presents a production from the Washington National Opera, featuring soprano JiYoung Lee as Marie, a young woman who was adopted and raised by an entire army regiment, and José Bros as Tonio, a love-struck young man who joins the regiment just to be near Marie. The performance comes to us from the John F. Kennedy Center for the Performing Arts, on the banks of the Potomac in Washington.

The Story of 'The Daughter of the Regiment' 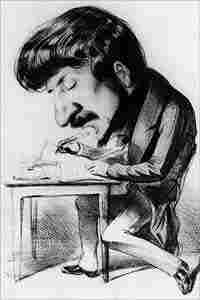 Gaetano Donizetti wrote 65 operas in less than 30 years. At one point, one of every four operas performed in Italy was his. Getty Images hide caption

In Act Two, Sulpice and Marie cut loose for a moment, while the snooty Marquise is dozing. Karin Cooper hide caption

Marie and Tonio (JiYoung Lee and José Bros) share a rare private moment in Act One of The Daughter of the Regiment. Karin Cooper hide caption

Act 1: The opera's action takes place in the early 1800s, in the mountains of the Swiss Tyrol. Villagers are gathered around as if on the lookout. They can hear a battle in the distance, and the women pray for a French victory. They're confident because the 21st Regiment of Grenadiers has joined the fight, and they are unbeatable. One of the grenadiers, Sergeant Sulpice, comes on the scene accompanied by an attractive young woman in a military uniform. Her name is Marie, and the grenadiers found her alone on a battlefield when she was just a little girl. The soldiers took her in, protected and raised her, and now love her as their own daughter.

Recently, though, Marie has been glum. Sulpice wonders whether she's brooding over a certain young man she's been seeing. Marie tells him that this young man saved her life — preventing her from falling off a cliff — and there's an attraction between them. That's all well and good, but the regiment has decreed that only a grenadier is worthy of their Marie.

Suddenly there's a commotion. Soldiers have captured a man named Tonio, saying he's been hanging around the camp and is surely a spy. Naturally, he turns out to be the man who rescued Marie from certain death. She pleads his case to the grenadiers, and they say he can go free — so long as he agrees to join the regiment. That's fine with Tonio — he'll do anything that will allow him to be near Marie. When he says he also wants to marry Marie, the soldiers are reluctant. But he wins them over with his sincerity, and Tonio celebrates with the famous number Pour mon ame.

A local Marquise then spoils the fun. She's the Marquise of Birkenfeld, and says she's related to Captain Robert — a former member of the regiment. This, she says, also makes her Marie's aunt. The Marquise has decided that it's unseemly for her own niece to be living with a regiment of soldiers. She declares that, from now on, Marie must live with her, in her grand chateau. It looks like Tonio has become a soldier for nothing. Marie sings a sad farewell to the soldiers, and to Tonio, and heads off to the chateau.

Act 2: At the Chateau de Birkenfeld, the Marquise is educating Marie in "ladylike" pastimes — teaching her to dance the minuet, and to sing more sophisticated music than the soldier songs she learned as a child. But Marie's heart isn't in it. Sulpice has also been staying at the chateau, reluctantly helping with Marie's new "upbringing." When the Marquise dozes, Marie and Sulpice give up on the fancy arias and minuets, and break into a rambunctious marching song.

The ruckus wakes up the Marquise, and their high spirits are quickly brought down when she grandly announces that Marie has been promised in marriage to the wealthy son of the house of Crackentorp. Marie responds with the melancholy aria, Par le rang et par. But the mood brightens again when Marie and Sulpice hear the grenadiers approaching in the distance. The soldiers soon arrive and Marie welcomes her old friends in the joyful scene.

The regiment marches in, led by Tonio, who has been promoted to captain. He sings an emotional Romance, pleading with the Marquise to grant him Marie's hand. The Marquise is moved, but she says it's too late — Marie's marriage has already been arranged. She'll soon be a Crackentorp.

Sulpice is prepared to make one final appeal on the couple's behalf when the Marquise reveals the truth about Marie's heritage. She confides to Sulpice that Marie is not her niece. She is actually the Marquise's daughter, born out of wedlock. Sulpice gives Marie this news, and she caves in. She can't go against her own mother.

Guests arrive to witness the signing of the wedding contract. (In the production from Washington, some of the announced guests are obviously locals: The Count and Countess of Mount Vernon, the Baron of Foggy Bottom, and the Duke and Duchess of Anacostia.) Marie recalls her tender memories as daughter of the regiment. The aristocrats surrounding her are scandalized by her uncouth upbringing. But the Marquise is so touched that she relents, and sends the astonished Crackentorps packing. The Marquise then leads Tonio to Marie and joins their hands. In a rousing ensemble finale, everyone wishes the couple well.