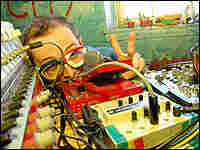 Dan Deacon's MySpace page features footage of an appearance on a local morning TV show in Savannah, Ga. Peering over a graveyard of junk electronics and sporting an oversized pair of goggles, he certainly appears to be in his element. Yet as Deacon flails and gesticulates awkwardly amid an array of Casio keyboards, old patch cables and dime-store drum machines, it's not clear whether the host has any idea what's going on. But it would be hard to blame the guy if he didn't.

Deacon's latest, Spiderman of the Rings, reflects a wide assortment of moods, conveyed with cleverness and fiery energy. Dispensing rapid-fire pop-culture references and samples — like Woody Woodpecker's grating chortle — the disc takes found-object art to a glorious extreme. "The Crystal Cat," perhaps the album's most focused and explosive song, finds Deacon artfully employing a barrage of hard dance beats and overdriven sequencers. As he unleashes a flurry of rhythmic lyrical phrases, the words become distorted by harmonizers and pitch shifters that bend his voice well into Alvin & The Chipmunks territory. But the melodies and grooves inevitably become infectious, contributing to a song that makes it hard to resist banging around and singing along.