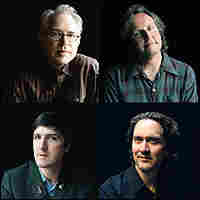 Producers aren't usually billed as prominently as performers, especially in jazz. But while purists often discount overdubbing as diminishing jazz's improvisational nature, studio trickery is nothing new for the genre. Following in the footsteps of Miles Davis and Teo Macero's legendary artist-producer relationship — on In A Silent Way, Bitches Brew and On the Corner — Floratone takes the idea of studio manipulation to a glorious extreme.

The collaboration formed after prolific jazz guitarist Bill Frisell and famed session drummer Matt Chamberlain teamed up for a stream-of-consciousness jam session, then brought in veteran producers Lee Townsend and Tucker Martine to shape those raw tracks. The producers were tasked with manipulating, splicing, treating and generally making sense of the freeform music.

That's not to say the album devolves into unfocused jams. Much in the way Davis and Macero sculpted those early electric albums, songs such as "The Passenger" slowly reveal themselves as fully realized compositions. Frisell's tremolo-intensive guitar sits front and center, teasing out references to gritty desert rock, Spaghetti Western soundtracks and even the slinky upstroke strums of dub and reggae. But as the Davis-esque trumpet melodies unfold over Chamberlain's swampy New Orleans shuffle, Townsend and Martine's sounds seep with languid, ethereal atmosphere. The moody, sprawling soundscape of futuristic jazz that results functions as a fine showcase of both production artistry and instrumental prowess.