In Act Two, a confused Jenufa wakes from a drugged sleep to find her newborn baby missing. As she sings a profoundly moving prayer for the child, Kostelnicka returns to tell her that the infant has died.

The soprano discusses Janacek's opera, and its complex title character.

If you only knew operas from reading their stories on the printed page — without listening to the music — the world of non-comic opera might seem like a uniformly dark and dreadful place. Just think about how many operas there are that feature betrayal, emotional anguish and violent death as key elements. 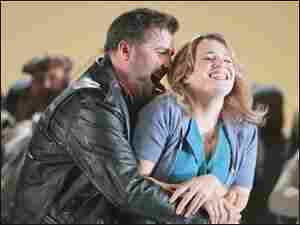 But in any opera, the written story is only part of the picture. Add great music to that story, and you often wind up with a drama in which anguish and violence are transformed, becoming the means of profound and truly beautiful expressions of the human condition.

There are plenty of examples, ranging from the straightforward, verismo operas we often think of as guilty pleasures, to the complex dramas of Mozart, Verdi and Strauss. And we've got one of the best examples of them all right here.

Janacek's Jenufa revolves around one of the worst crimes portrayed in any opera, the drowning of a newborn infant in an icy river. It's an act driven by narrowmindedness and cowardice — but also by love. And remarkably, the overall theme of the opera is forgiveness. When the title character's child is murdered by her own stepmother, Jenufa reacts not with calls for vengeance, but with tender absolution — set to some of Janacek's most radiant music.

On World of Opera, host Lisa Simeone brings us a production from the Washington National Opera starring soprano Patricia Racette, one of today's foremost interpreters of the title role. Lisa also talks with the opera company's general director, Placido Domingo, about the opera and Racette's stunning portrayal of Jenufa. And we hear from Racette herself, discussing the complexities of her role and the unique beauties of Janacek's music.

The Story of 'Jenufa' 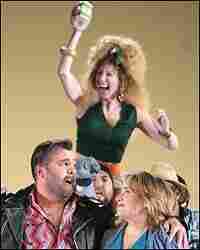 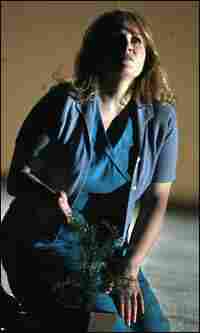 In the second act Jenufa wakes to find her child gone, and offers a moving but ultimately futile prayer for his safety. Karin Cooper hide caption

ACT ONE: Jenufa is a young, single woman living in a small town with her stepmother, who is known as Kostelnicka. Jenufa has fallen in love with Steva, the handsome owner of the local saw mill, and she's pregnant with Steva's child. As the opera begins, Jenufa is near the mill, anxiously waiting for Steva to return from a meeting with army recruiters. She's hoping to marry Steva immediately, but if he is drafted, they'll have to delay the wedding and everyone will find out about her pregnancy. Also hanging around the mill is Laca, Steva's half-brother. He's less handsome and has always harbored feelings for Jenufa.

When the mill foreman annouces that Steva hasn't been drafted after all, Jenufa is relieved. But her good spirits turn sour when Steva and his friends, including a group of flashy young women, show up drunk. Their raucous celebration comes to a crashing halt when Kostelnicka arrives. She's the type of stern matriarch you don't want to mess with and, in a harsh tone, she declares that she won't allow Steva to marry Jenufa until he stays sober for a full year.

The couple is left alone and Steva brags about all the pretty girls who flirt with him. When he leaves, Laca tells Jenufa that Steva only stays with her because she's beautiful. Laca continues to taunt Jenufa, speculating about what his sharp knife could do to her rosy cheeks. Awkwardly, and impulsively, Laca tries to kiss Jenufa. When she struggles with him, the knife he was holding slashes her face. People run in to help, and the mill foreman accuses Laca of using his knife on purpose.

ACT TWO: Months have passed, and we now find Jenufa in hiding, in Kostelnicka's cottage. She has given birth to a baby boy, but Kostelnicka has told the villagers that Jenufa has been away, in Vienna.

Kostelnicka gives Jenufa a drugged drink to make her sleep. Alone, Kostelnicka ponders what to do about their situation. She says everything would be better without the baby but that more than a week has passed since the birth, and the infant shows no signs of dying.

Kostelnicka is distraught. How can she save Jenufa's reputation, and preserve their standing in the village? The problem is the baby. Just as she envisions killing the child and throwing him at Steva's feet, Laca knocks on the door. He knows nothing about Jenufa's circumstances, and is hoping to persuade Kostelnicka to let him marry Jenufa. Kostelnicka says that marrying Jenufa would now be a true test of his love, and then tells him the whole story. When he asks her how she could possibly expect him to accept Steva's child, Kostelnicka panics and tells him the infant has died. Laca leaves and two intense scenes follow, one for Kostelnicka and one for Jenufa.

After a struggle with her conscience, Kostelnicka convinces herself to give the baby back to God. She wraps the child up, and heads to the frozen mill stream. "When the spring melts the ice away," she says, "there will be no trace of him."

With Kostelnicka gone, Jenufa wakes up in a stupor, still drugged from the sleeping medication. She works herself into a frenzy when she can't find her baby or her stepmother. In her anguish, she kneels to offer a prayer to the Virgin Mary.

As Jenufa is finishing her prayer, Kostelnicka returns from the river. She tells Jenufa that she has been delirious with fever for two days, and during that time, her baby died. Jenufa's prayer turns to an expression of stunned grief and overwhelming loneliness. Kostelnicka then tells her about Steva's plans to marry someone else, and advises Jenufa to accept Laca's love.

When Laca arrives with a proposal, Jenufa says her life must be at an end. Who would want her now? Laca says he does. As the superstitious Kostelnicka blesses the couple, the winter wind noisily blows open a window, sending it crashing to the floor. Kostelnicka sees this as an omen, calling it "the icy hand of death, tearing at my heart."

ACT THREE: Two months have gone by, and townspeople are gathering at Kostelnicka's house for the wedding ceremony. The mayor and his wife arrive, along with their daughter Karolka and her fiance, Steva. Barena and other village girls show up with flowers, and a song.

Grandmother Buryjovka blesses the wedding couple and, just as Kostelnicka is prepared to add her own words, voices are heard outside. The boy Jano runs in, crying out that the body of a baby has been found in the river. Jenufa recognizes her baby's clothing, and declares that the child was hers. Everyone assumes Jenufa is the murderer, and they begin to turn on her. But Kostelnicka comes forward with a confession. "It was I alone who killed Jenufa's baby," she says. "I drugged Jenufa, then I took her child to the river and pushed it through a hole in the ice. Have mercy on Jenufa." Jenufa says she understands why her stepmother acted as she did. As Kostelnicka is led away, Jenufa forgives her.

With the wedding guests gone, Jenufa and Laca are alone. She expects him to leave, as well. "Surely," she says, "you see now that my wretched life can never be linked with yours." But Laca says all that matters to him is that the two of them stay together, and Jenufa declares that the love she now feels means that God has finally smiled on them.