Accessibility links
Josh Ritter In Concert Drawing on Bob Dylan's penchant for evocative poetry and Bruce Springsteen's gift for wrapping complex issues in homey narratives, Ritter is becoming the standard-bearer for a new generation of Americana artists. Hear him recorded live in concert from Washington, D.C. 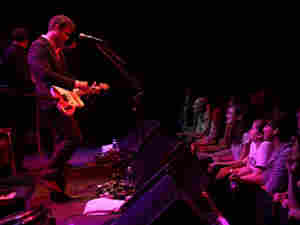 Bob Dylan and Bruce Springsteen aren't ready to pass the torch to anyone just yet, but when they do, it could well go to Josh Ritter. Drawing on Dylan's penchant for evocative poetry and Springsteen's gift for wrapping complex political and cultural issues in homey narratives, Ritter is quickly becoming the standard-bearer for a new generation of Americana artists. Hear Ritter recorded live in concert from Washington, D.C.'s 9:30 Club. This performance originally webcast live on NPR.org Oct. 9, 2007.

Ritter has released five new studio albums in a career that began just seven years ago. The Historial Conquests of Josh Ritter, released in August, is his most ambitious and compelling work to date, showcasing an artist as he deftly moves from the bittersweet acoustic songs of earlier recordings to denser electric rock.

"A lot of this record is an effort to capture moments when they were at their most passionate," Ritter says, adding that he wanted "to capture many different emotions that simply wouldn't work if we had ever tried to re-record them. There are a lot of different feelings here, but what ties them together for me is how raw they were captured and how we maintained that rawness throughout the production."

In 2006, Paste magazine dubbed Ritter one of the "100 Best Living Songwriters" — high praise for someone who never intended to be a musician. Both of Ritter's parents are neuroscientists, and Ritter himself studied neuroscience in college before discovering the songs of Gillian Welch, Townes Van Zandt and Leonard Cohen. He bought his first guitar at Kmart.

Ritter recorded Historical Conquests earlier this year while still on tour for his last album, 2006's The Animal Years.

In an interview with NPR's Alison Stewart, Ritter says that Animal Years was an exhausting exercise in precision. "I spent a lot of time on every little tiny bit, and getting lots of things just how I wanted them, because I wanted all the songs to fit together. And that sort of thing, you react to it by kind of wanting to blow something up, and punch a wall on occasion. And that's sort of what I wanted this record to sound like. It was just having fun. It's so much fun to play this stuff live. It's just kind of wild music."