Accessibility links
What's Greener, Flying or Driving? Flying is the fastest way to reach your destination — and it's not the worst option for the environment, researchers say. 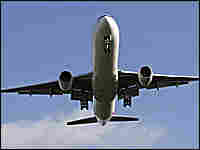 Each month, NPR's Climate Connections and National Geographic's Green Guide answer your consumer-related questions on climate change – explaining what you can do to make a difference.

Send us your questions about how your consumer habits have an effect on the environment.

Many listeners ask about the effects of air travel on the environment. The questions come as part of our Climate Connections series with National Geographic.

Listeners want to know how much greenhouse gas is poured into the atmosphere by commercial flights.

Experts say that aircraft are a small but significant source of the warming gases created by humans, accounting for about 3 percent of the world's total emissions. A typical airliner flying across the United States produces close to three tons of carbon dioxide per passenger.

So would it be better to take that cross-country trip by car? Not according to the researchers at National Geographic's Green Guide. They say you will roughly double your emissions if you decide to drive.

Take the train, however, and you can cut your carbon footprint in half.