Stars in Concert on All Songs Considered

Stars in Concert on All Songs Considered 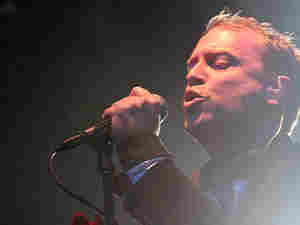 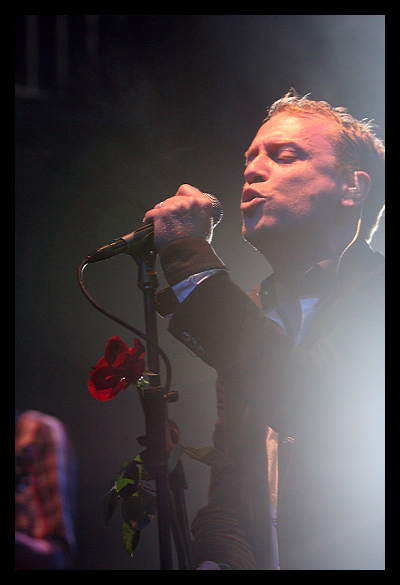 Stars, performing live at the 9:30 Club in Washington, D.C.

Stars recently released its fourth and best album, the powerful (and powerfully titled) In Our Bedroom After the War. It's an artful mix of sadness and joy, set against a wash of '80s-pop-inspired guitars and rhythms.

Stars frontman Torquil Campbell says he had a singular goal in crafting the album: "What is the darkest possible situation I could try to turn into a beautiful pop song? To me, that's our responsibility in writing — that no matter how grim it is, it's your life, and we have to try to make it beautiful for three and a half minutes. If you could make horror movies that were like love stories, that would be my ultimate genre."

Campbell formed Stars in 2000 with keyboardist Chris Seligman before relocating from New York to Montreal. They were joined later by singer Amy Millan and drummer Pat McGee.

Stars released its debut (Nightsongs) in 2001, followed by Heart in 2003. The band's breakout album was 2005's critical favorite Set Yourself on Fire, which was remixed and/or remade as Do You Trust Your Friends? earlier this year.

"There's a very high level of expectation in this band for each other's work," Campbell says. "There's a sense that you have to come to the table with things that are very interesting and good, or someone will tell you that they're not, and we were especially good this time about doing that in a way that was respectful and constructive."

New Buffalo will open the live concert webcast on NPR.org. The Melbourne-based band is essentially the music of Sally Seltmann, a singer with a lovely, haunting voice. Much like her contemporaries Beth Orton, Keren Ann and Feist, Seltmann's songs weave digital bleeps together with acoustic guitars and breathy harmonies.

Earlier this year, Feist covered Seltmann's song "1234" and released it as the first single from her own album, The Reminder. The move led New Buffalo to the Arts & Crafts label, home to Feist, Stars and their cohorts in Broken Social Scene.

Arts & Crafts released New Buffalo's piano-heavy Somewhere, Anywhere in August. "I see the album as embracing the concept of opposite experiences and contrasting moods," Seltmann says. "The innocent, naive and colorful versus the dark, intimate and secret-like. The yin and yang in life. The highs and lows. The ego and the show. The masculine and feminine."