Accessibility links
Sun Ra: 'Cosmic Swing' Whenever he took the stage, audiences were guaranteed a musical spectacle. Half mystic, half visionary, the pianist and bandleader charted a relentlessly adventurous course through the jazz tradition. 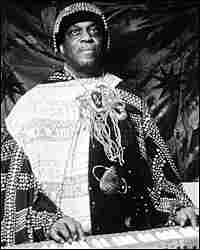 In 1954, the artist legally known as Le Sony'r Ra founded the El Saturn record label, where he would release most of his extensive discography. Michael Ochs Archives / Getty Images hide caption

Pianist and bandleader Sun Ra has been both ridiculed as a charlatan and revered as an innovator of jazz theater and collective improvisation. His band, the Sun Ra Arkestra, ranged anywhere from 10 to sometimes more than 100 musicians, and embodied many sounds, styles and cultures. He was an artist whose style, in all its ceremony, ushered in an era of free improvisation and big-band experimentation.

School certificates state that Sun Ra was born Herman Poole Blount on May 22, 1914 in Birmingham, Ala., but Sun Ra denied any connection to that name. "That's an imaginary person, never existed," Ra says. "Any name that I use other than Ra is a pseudonym."

While attending public school, Ra got his introduction to music and was given a piano as a birthday present; he claimed that playing the piano and reading music came to him as naturally as a bird learning to fly. Throughout the '30s and '40s, Ra led his own big band playing the music of Jelly Roll Morton, Charlie Barnet and Duke Ellington.

In 1946, Ra moved to Chicago, where he worked with everyone from Billie Holiday and Johnny "Guitar" Watson to one of his heroes, Fletcher Henderson. Ra joined Henderson's band and would later include his music as part of his own band's repertoire.

At the same time, Sun Ra became involved with stage shows, as well as a group that studied the Bible, Egyptian mythology and the teachings of the Armenian mystic G.I. Gurjieff. Some believe that his involvement in these communities, combined with his childhood love of shows like Flash Gordon and Buck Rogers, led to his mythic music about space and Egypt. His notable tunes include the likes of "Space Is the Place," "Saturn" and "Ankh."

His concerts with the Sun Ra Arkestra were theatrical spectacles, incorporating electronics, synthesizers, rarely used instruments, lights and costumes. "Sun Ra was in show bands, so we had to have music expressed by lights and colors," recalls a former band member, saxophonist Marshall Allen. Some critics wrote that Ra's cosmology stood in the way of the music, but for his fans, it was just part of the package.

Sun Ra sometimes took jazz in controversial directions — some even accused him of running a cult. However, band members like saxophonist Danny Thompson said, "We're here to enlighten people's minds about outer space, and try and better this planet." Ra also influenced such musicians as Ornette Coleman, John Coltrane, Cecil Taylor and Jackie McLean, and inspired the creation of the Chicago-based Association for the Advancement of Creative Musicians — an organization known for its relentless avant-garde aesthetic.

Sun Ra recorded and performed until his death on May 30, 1993. Today, Sun Ra's Arkestra still lives on, led by Marshall Allen.